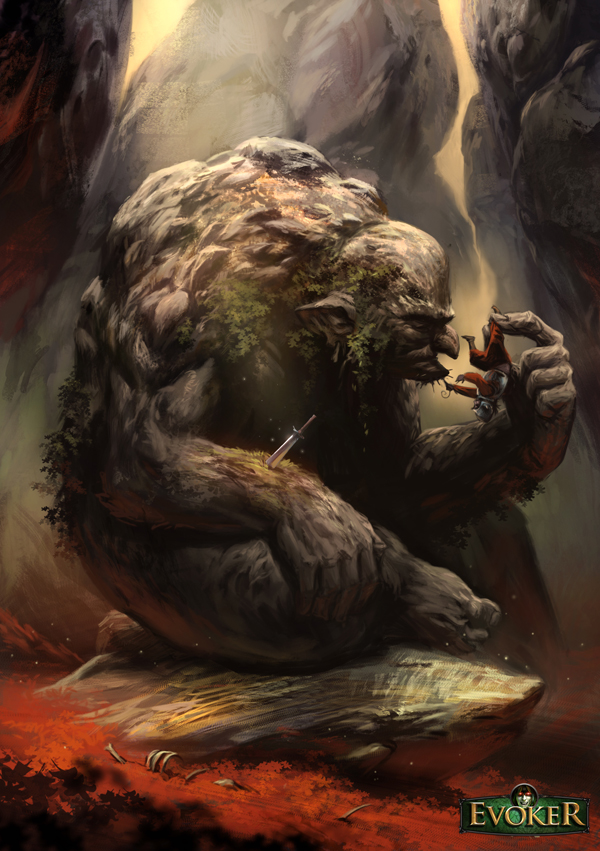 And again a bunch of links from all the buddys that worked with me on that game:

This is probably the most realistic looking depiction of a cave troll that I've ever seen! Granted, they don't actually exist. I still appreciate how you did bring this to life. I think it's a troll that's ALSO a cave. I can just count the little rocks he has on his body. Well, he's himself just one big rock.

I like the sword in his body. This really does belong in an art museum. Even the knight's done in a realistic manner. It's just a wonderfully lush design. I can see the bones on the ground. I think it's either red leaves or lava.

The rock he's sitting on looks like a shark.

Haha yes, I see this picture as a story, with a twist. You know, the olde excalibur got itself stuck in a stone again, and someone has to pull it out to become a legend! Ah, but this time the "stone" just so happens to be the fore-arm of a massive cave troll! Hey that's a superior, and more intense legend anyways.. if you manage to survive! I mean hes gotta already be angry there's a freakin' sword in his arm, and now pesky adventurers and fame seekers wont stop disturbing him to attempt to pull it out! Despite the constant annoyance at least he has a steady food supply without ever leaving home, but who knows if trolls like to think on the bright side of things or not.

You sir are a motherfucking animal, wow.