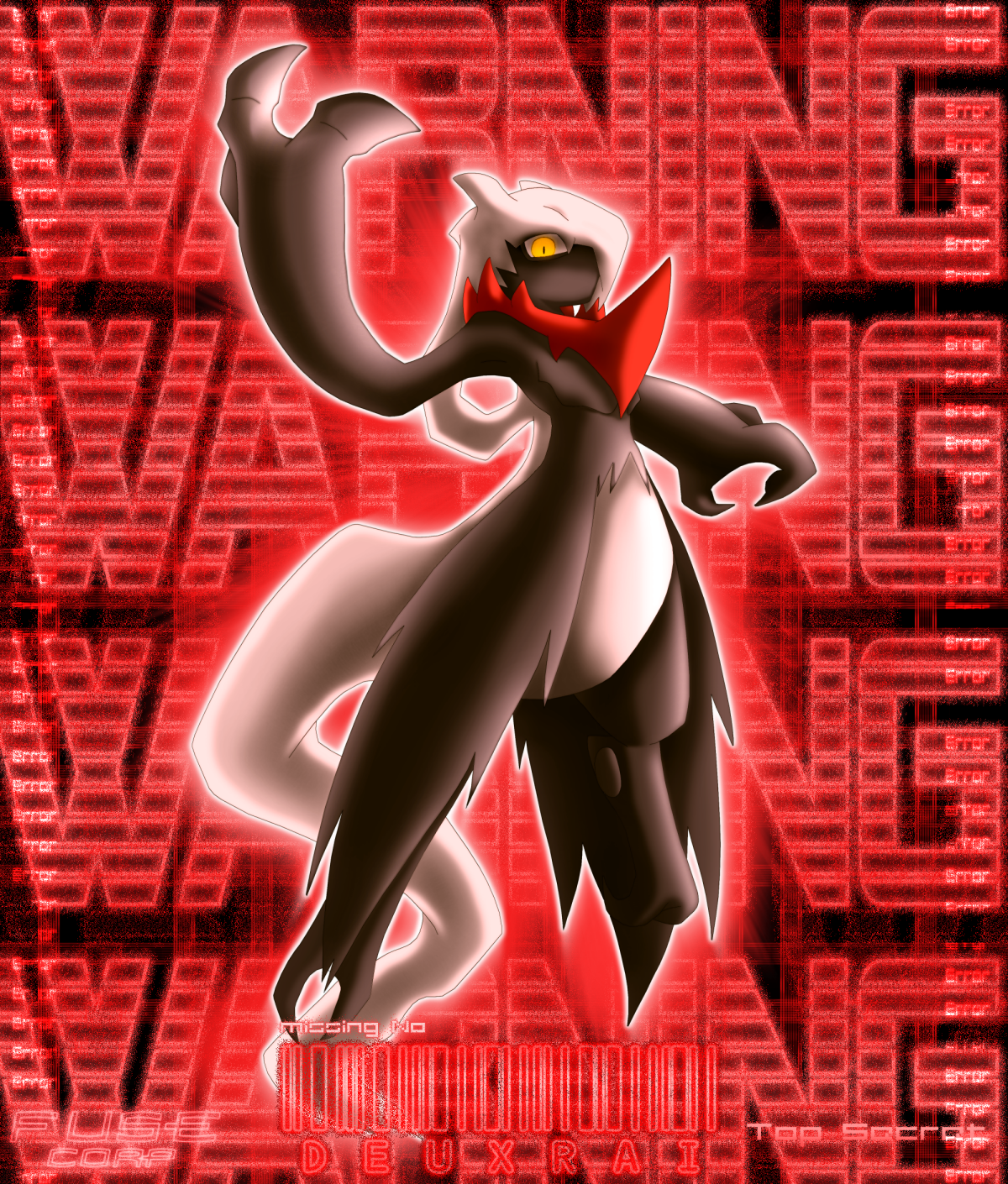 FUSE Corp.
A corporation that dedicate its resources to experiment with Pokemon.

Their specialty is to create new creatures by mixing their DNA,enhancing their abilities for battle,and then sell them as products,but only for the wealthy and powerful.
(Their procedures are expensive,so a finished fusion is worth millions)

Not much more is known about this FUSEmon,who its not even available on the FUSE Corp database...at least no more.

It all began with a scientist,searching in the database for crucial information regarding the latest FUSE Corp experiments.
During an automatic search,it caught a 1/2 second glimpse of a red screen,and some sort of black and white figure.

He never saw that picture again.

Since then,rumors about this creature fill the corridors of the corporation...

Some say it died right after its birth,being the most ambitious experiment,and costing billions to the corp.
Because of this,any data about this failed attempt was erased from database...or at least most of it.

Others claim that it exists,and it serves as a personal bodyguard for the most powerful man on Earth,in exchange for protection of FUSE Corp's illegal activities.

Another crazy rumor is that the creature was never born from its egg...but it mutated into a computer virus,and now resides in the mainframe,ready to take over the entire building,along with the experiments in it.

But perhaps the most believable and commented rumor between the fellow workers and scientists tells about this creature escaping right after its birth,and now residing in the deepest parts of the underground labs,hidden in,and being one with the shadows.

In fact,an incident regarding a janitor found in a deep comma in the darkness was inmediately related to this creature.
The area where the man was found is now closed.
No explanations have been given about this,and the janitor its still in a comma.

Every once in a while,the man starts to whisper a strange word.

The "rumor" now has a name.

Well guys,this fella was screaming to be colored.Im glad I finally did.

So,what happens when you mix the most powerful mind on Earth,with the ruler of nightmares?.

This.
A monster cappable of destroying your mind through fear,while being awake.

Talk about a dream, or should I say nightmare, come true :3 Great work, best fusion Pokemon I've seen to date!

When I saw this, I went speechless. If I had a staring contest with deuxrai... I would lose immediately.

that would be a cool thing...

to mate legendary pokemon... kinda does the dmqj effect in my brean though...
mixbreeds of pokemon is still a koo idea! props 2 u bro!!!