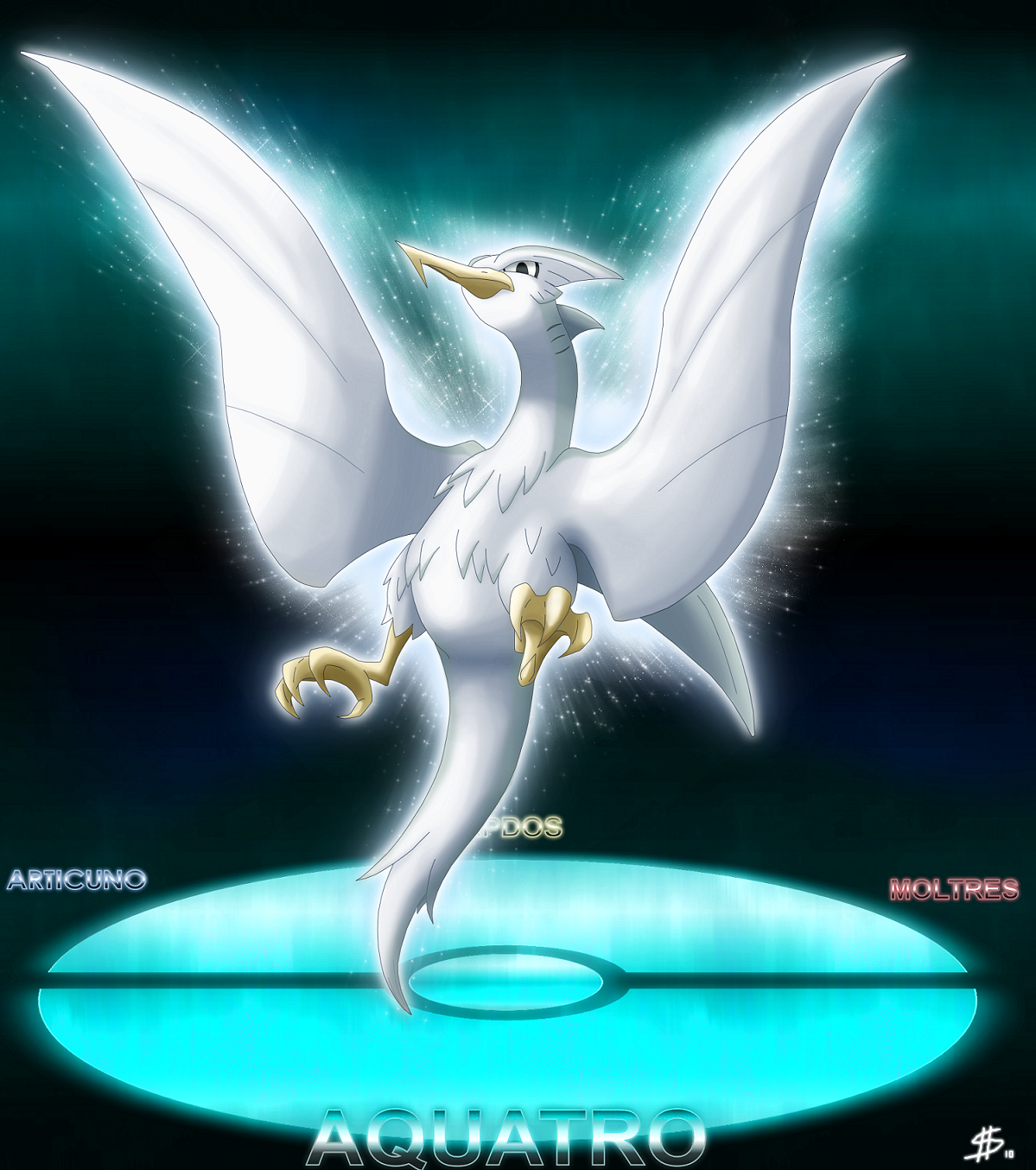 Well,its been a while since I've been around this site.Time to update =)

This is the description of the picture copy-pasted from Deviantart:

It fought against a very strong Lugia,to claim the right to be crowned guardian of water (and therefore of the sea),and emerge as a demigod,together with his brothers.

The three elemental guardians were already chosen.Fire,Thunder and Ice.

Only water was left,and the fourth brother step to the front.
Arceus was ready to crown Aquatro...

But suddenly,the leader of a flock of Lugias interrupted the ceremony,and challenged Aquatro to a battle,to prove himself as the true guardian of the sea,and protector of the kingdom of Kyogre.

Arceus couldn't believe such offense,and requested Lugia and the others to leave inmediately.

Lugia felt,deep inside him,that he was ready to protect the kingdom,and every creature living in it.

Arceus admired such bravery to challenge a god's decision,but he wouldn't allow it to happen.

But Aquatro stopped Arceus,and explained that,if he had to be crowned as a demigod,then he needed to prove he was worthy of such a title.
If he truly was that powerful,then a regular creature wouldn't be a problem to him.

Articuno,Zapdos and Moltres were proud of his brother,and stood there to witness the event.

The struggle between both creatures lasted for 30 days.

But Aquatro was finally defeated.

The brothers couldnt believe this.
That a common creature could do this to a sacred being.

Zapdos was dissapointed of his weak brother.
Moltres stood quiet and calm.A fair result,she tought.
Only Articuno,in silence,felt sad for her brother.

But there was nothing left to do.
Arceus crowned Lugia as the guardian of the sea.

Ashamed of his defeat,Aquatro started to fly far from that place.
Articuno followed him...but Zapdos and Moltres stopped her.

Eventually,Lugia became the leader and watcher of the Legendary Birds.

It is believed that,to stay close to his brothers in a way,Aquatro created a cave right below Moltres Lair,in the deepest part of the sea,and stood in there for thousands of years,alone,as a way to punish himself.

Oh man,just when I thought I would succeed in sugimori style,It ended up looking like "Esemori" Style (A mix of both my shading style and sugi's)

So,as you can see,I didnt want to add many details to it,to stay similar and simple,like the other birds.

The design is a general mix of birds like the cormorant and seagulls,and the Delphinidae family (The group of dolphins).That's why the wings look like fins,aside from other aquatic details.

Aquatro is not exactly a fast swimmer.He can fly fast though.
His specialty is to dive at an incredible speed,and strike an underwater opponent with his harpoon beak.
Thnx to his gills,he can breath underwater.

Aquatro is as powerful as the other birds,and the fastest of the four.

I really like the picture and the story!
I really think that ice and water is kind of the same thing....
What about a fifth sister that was thought to be dead, with an earth element!

That's what really does it for me. You find a way to bring it all together even the baby Lugia, which wondered about. Nice job

I never noticed the Uno, Dos, and Tres in their names! LoL I feel kinda dumb after having Pokemon in my life for most of my childhood.....