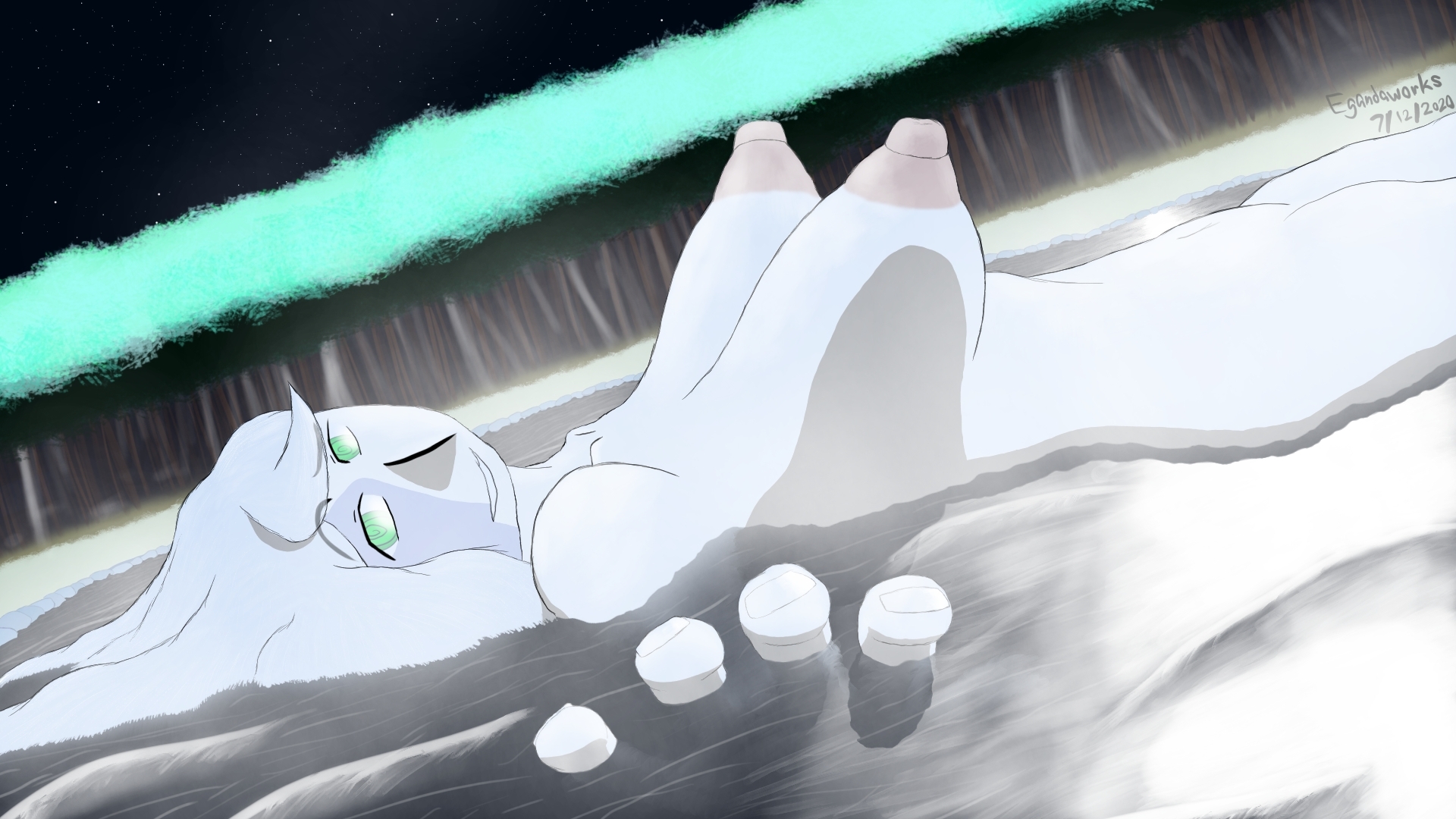 A month (give or take) of on and off work and I just love how it came out!

This one was fuckin’ tough! Making the line art felt like a chump’s thing! The rest was just an uphill climb in difficulty.

The woods were kind of hard. The tree trunks and spray-painted darkness were fairly easy, the beams of light in the woods were so-and-so (I wanted to make the inner part look more lively), but the leaves and their lighting were the hardest things to nail down when they should’ve been the easiest. Finding the right color took ages. I forgot what I did with August’s recent yukata pic; I also had to relearn the texture of leaves, oh joy.

Then there was the water. The background water was simple to do. It took some retries to make it look believable, but I had finally gotten an aesthetic that I like. The waves in the forefront, though, I kinda just improvised. They weren’t gonna look five-star; I knew this from the get-go.

Coloring Elly was basic stuff, up until it got to the point where I had to address the parts of her that were underwater. I sifted through the brush selection in Krita to find “Wet Smear” and “Wet Paint Detail,” the two saving graces of this project. With these tools, I was able to make the descent into the water look more realistic. I really enjoyed coloring the part of Elly’s arm that was underwater. The resulting style of the limb made me think of Enya’s “Orinoco Flow” music video I saw a while back. Some spray paint, a little eraser touch-up, and ba-boom! Waves on her body! Had to bring the coloring of the fingers to a higher layer, though. Just made things easier that way.

As I continued working, it became increasingly apparent that the moonlight was going to take on a much more prevalent role to the visuals. Both on land and water, I had some significant trouble trying to angle the lighting just right. However, the shade on the land did make for a nice point of reference during the project. I’m glad I stuck with the amount of lighting I did. I was going to have light cast down on Elly from the engawa (this is what Japanese-style porches are apparently called), but I decided to just tussle with the one light source.

This project was a layered nightmare. Figuring out the order of operations here, so to speak, was a complete pain in the ass. From lowest layer to highest:

--Spray paint for lower edges of color for illusion of depth, trimmed to emulate waves

--Waves for the foreground, done with "Wet Paint Detail" and touched up by "Wet Smear"

--Shimmer for the forefront

I don’t know why, but I felt this would help out any viewers who wanna paint sometime. Sorting out the order of doing things was tricky and honestly kind of boring. Might as well expedite the hassle.

Shimmer on Elly’s skin, hair, and nails were added as water shine on her body.

No point in talking about the steam. Simple stuff, like powdering a nose.

Well, it’s finally all finished and it came out great!

Anyways, it’s been a long day, so I’m gonna hit it in. Enjoy!