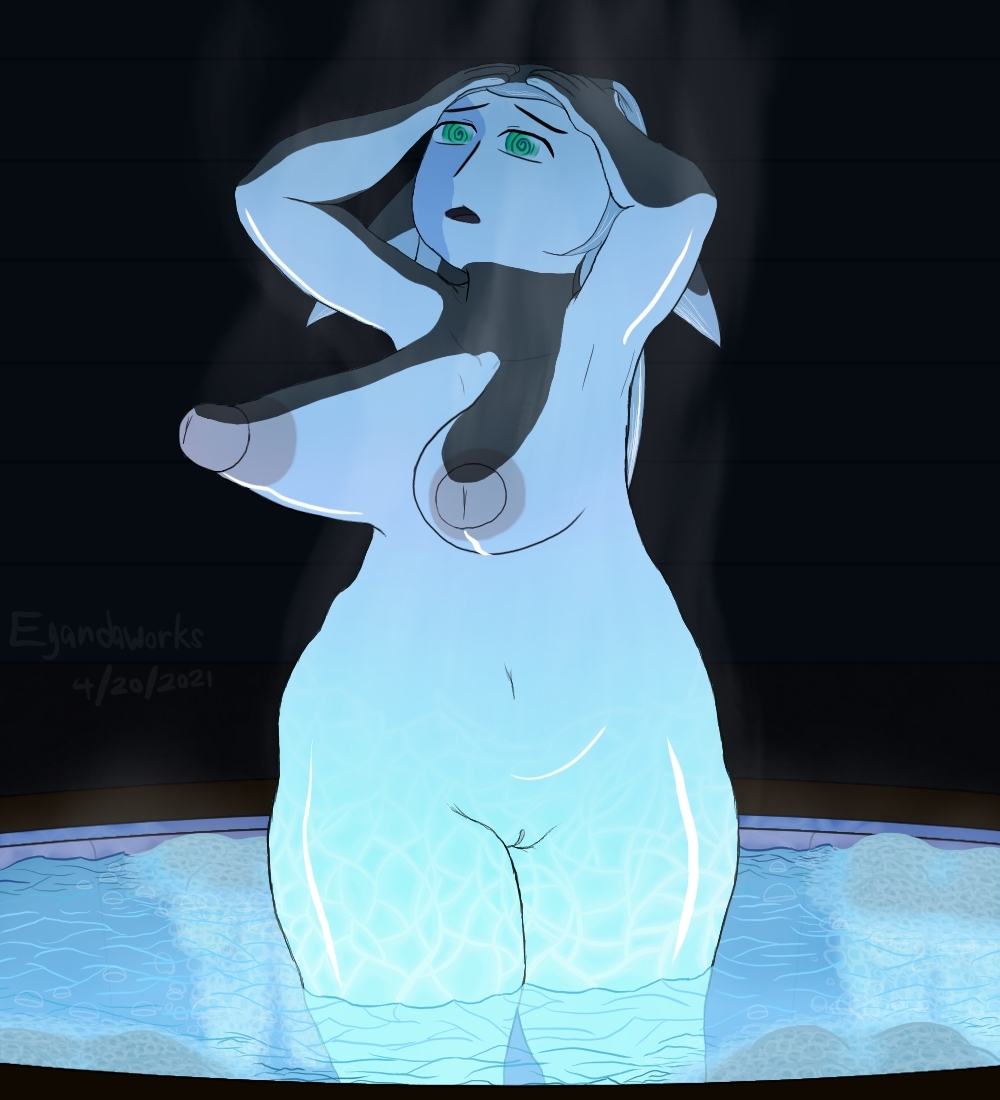 And it is complete!

Here's one of the two Elly pics that I've been working on. They both came out quite beautifully.

Below is the layer scheme of the picture, for those wanting a more vivid grasp of how I managed to pull this off.

From bottom layer to top:

It was quite a puzzle, but I managed. The second pic is similar layer-wise.

I'm getting good at drawing torpedo tits.....good...good. I used Elly's latest birthday picture as reference, but in due time it'll become second-nature.

For the waves, I worked with four shades of blue, with the brightest hued waves inward and the darkest waves at the edge of the hot tub. I spray-painted the water's color beneath, but I really thought that something more on the surface would better accentuate the underwater lighting. This seems to be the case anyways for real-life hot tubs if you look at them carefully.

Quick fun fact: the web-like lighting you see on the tub rim and on Elly's body are apparently called "caustic" or "caustic network." Another quick fun fact: said lighting on Elly's body took me a few hours to make. It was totally worth it! Solid lines on top, sprayed thickness on bottom, tweak and mash and tweak again, and presto! Finished it off by powdering the top with a soft eraser set at large. It probably would have taken me a shorter amount of time if I didn't draw a grid for her thighs and waist. Normally I just let my high spatial intelligence work for itself, which is why I can draw shadows on a whim (the realization of this skill really sank in while I was working on August's most recent Christmas pics). However, given the fact that this was a more webbed layer than a solid one, I erred on the side of caution. This was new ground for me.

I dedicated a layer of lighting on Elly's body to sell the blueness of it all, if that makes sense. Really needed to amp up those late night sensual water vibes. I was thinking of erasing the blue body lighting underneath the water with the eraser set at 30% opacity or so, but after a moment of staring at the results, I decided against it. I think her skin underwater probably would be more flesh-colored, but one reason or another, I just didn't really like the look. I instead took to her underwater outline with the eraser at 80%.

One thing I dreaded about this project was the jet bubbles. Goddamn. I mean, the bubbles below the water were fairly easy--getting the output to commensurate with the position of the jets was manageable enough--but the bubbles above the water were an entirely different beast. First was the basic dimensions, which I kept getting crooked. After the outlines of the foamy eruptions were established following many takes, I then had to deal with the actual bubbles. These took a few tries as well, in terms of both shape and size. I didn't really have much liberty to make them jagged, but cleanly rounded shapes didn't seem like they would work here either. I went with a sort of in-between in this regard. And then fuck me the color! I set a sprayed mixture of blue and gray underneath it all to give the jet foam the illusion of density, but even then I had to adjust the transparency of the foam to make up for it; bubbles just weren't really meant to be all that visible at night. Overall, for the entire span of the jet bubbles process, it felt all too easy to make it all look like crap. But after quite a bit of retakes, recolors, and readjustments, I can at least say that I am quite happy with the end result.

Body shine was another fairly new thing I worked with here. In terms of indicating wet skin, it's simple, yet effective. I tried jabbing the shine with a small eraser to better resemble the real-world aesthetic, but it looked too much like chalk. Even still, it didn't take me too long to decide that I just wasn't willing to commit to the nuance. This eschewing doesn't really seem to negatively affect Elly's dimensions though. The body shine makes her look even hotter. Skin droplets are alright, but body shine is not only less tedious, but from the looks of it, it clearly pays much more homage to a woman's figure.

Welp, here's the first picture of Elly in a hot tub. Enjoy! The second picture will be posted shortly.