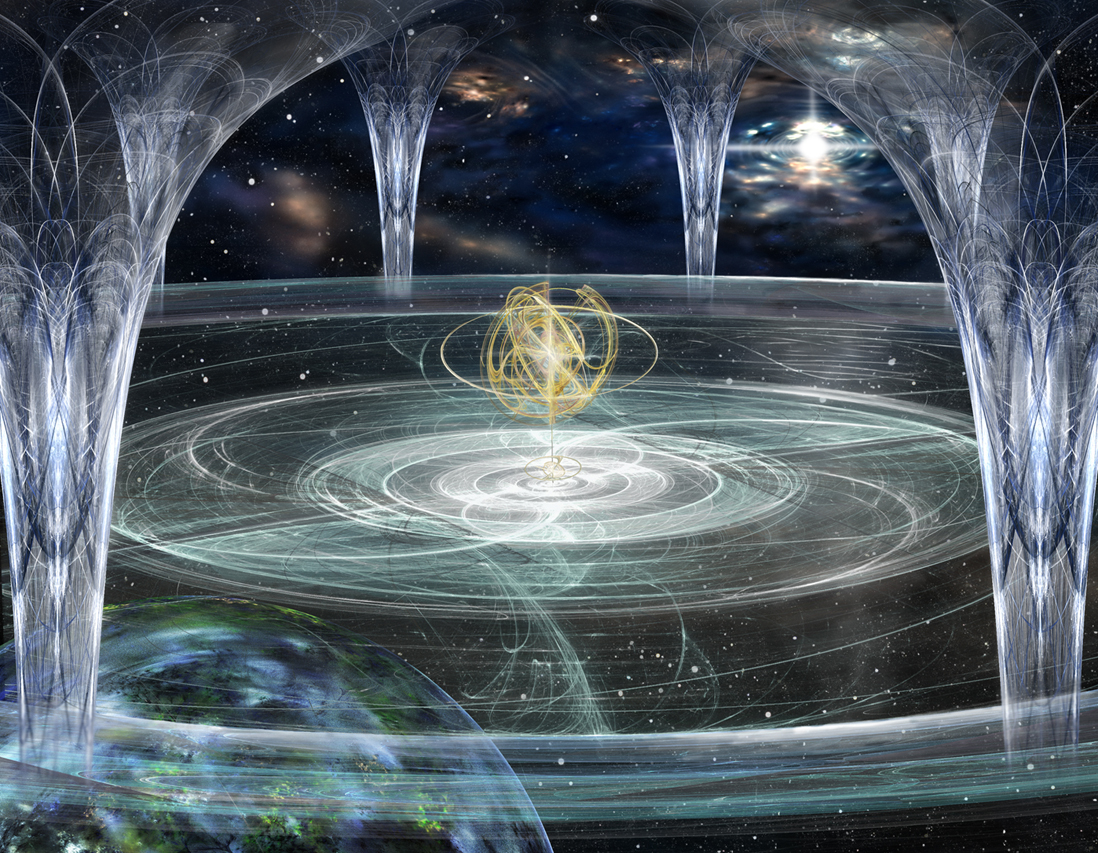 Fractals done in apophysis then combined in photoshop with a little manipulation. Added the stars, but not the nebula and planet, by hand. I also enhanced some of the fractals by hand too (added emphasis to a line here or there, mostly).

This has been in the works for quite a few months now. Time was not helped by me getting distracted by a few other art projects, not to mention a few unplanned apophysis designs that I wound up spending hours on when I could have been concentrating on this. Oh well, done now.

-Oh, the possibilities of where exactly this could be located are endless with the vastness that is space. But more importantly is what exactly is this observatory for. Making this another piece from you that makes me think a lot.

-I like how everything is centered around the smaller golden constellation structure. Making it more specific and the focal point of finding what you want to observe at the time. Possibly being able to transition your view just with the turn of it.

-Nice architectural style of the pillars and floor to give you some solid footing but still seem transparent enough to be walking on nothing. Much detail that must have been tedious to create. But even the observatory looks like a small piece of the puzzle with so much in the distance.

The focal point was very deliberate but I was worried it might be a little over kill. Glad you like that.

Well, this is the sort of image that I would expect of the inside of a god's house, as they can walk through spectral halls into a room that looks down on the very stars, the planets that orbit them and the creatures that dwell thereon, for the gods to play games with the lives of men.

The circular white "floor", coupled with the pillars give the impression of a large domed room, in an art-Deco fashion, with some sort of giant, golden contraption suspended at the centre, which would be relatively normal, except the walls are not composed of brick, but space itself, infinite and awe-inspiring.

The globe that you have added to the bottom left of the screen is a wonderful touch, that some might think was an homage to Pandora from Avatar. The sheer scale of this piece is incredible and it makes me as a reviewer feel very small, which is a shame, but a wonderful thing, to think that someone or something may be looking down upon me through a similar scenario many hundreds of thousands of light-years away.

I am glad you like this, since it took so long to put together! :D

I just love this kind of art!!

amazing is the only word i can use

Totally amazing work to be admired in all its forms the color intensity and perfection of fractals that make this a work of art.

My congratulations to the author;)