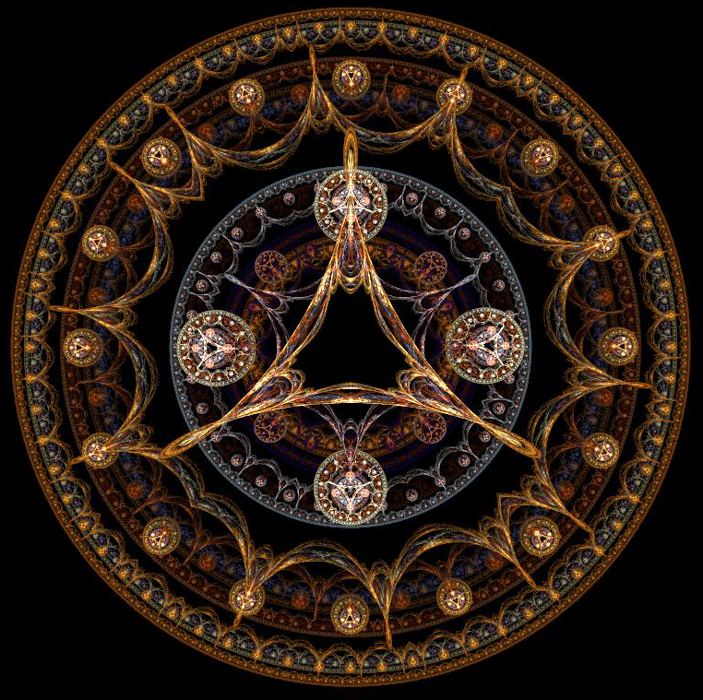 Another fractal image, and yet another that I spent ages just playing with. :)

On the down side, I just realised that I forgot to transfer my apophysis saves to my new computer! *bangs head*

I just hope I can dig it up and transfer them! Damn things are impossible to replicate without the saves/formula!

I don't know ANYTHING about art but on the left side of it is two lines together. It would look fine.

This fractal is rather interesting although there are, actually, many drawbacks to this.

Fractals of this style tend to rely on symmetry to look good, which this fractal as somehow lost. The spiked outer ring looks really strange as the spikes aren't appearing regularly. The four circles in the inner ring are pretty strange as the triangle inside them is pointing to the inside half the time, outside in the other half. The big triangle also looks really bad, it would have been better off if made invisible. Plus the fact that there are three spikes for every four circles it just seems to lose its symmetry.

I would think your julian transform needs to have its power changed to 3 and rotated slightly, that would be a much better way to do this.

I love Apophysis and I can see that you use Apo very well! :D :D I especially like your use of the juliascope variation.

Honestly. I have no idea how to produce fractal images, but still, based on the fractals I've seen on my life and since they are based on a mathematical formula I would say this one has to be the most amazing one I've ever seen!! It's so balanced, so perfectly ornamented, it looks like it's one of those draws in the roof or in the floor of the old royal rooms.
By looking at the borders it seems like a tailored ornament and that's quite impressive coming from fractal art! Pleasant job!