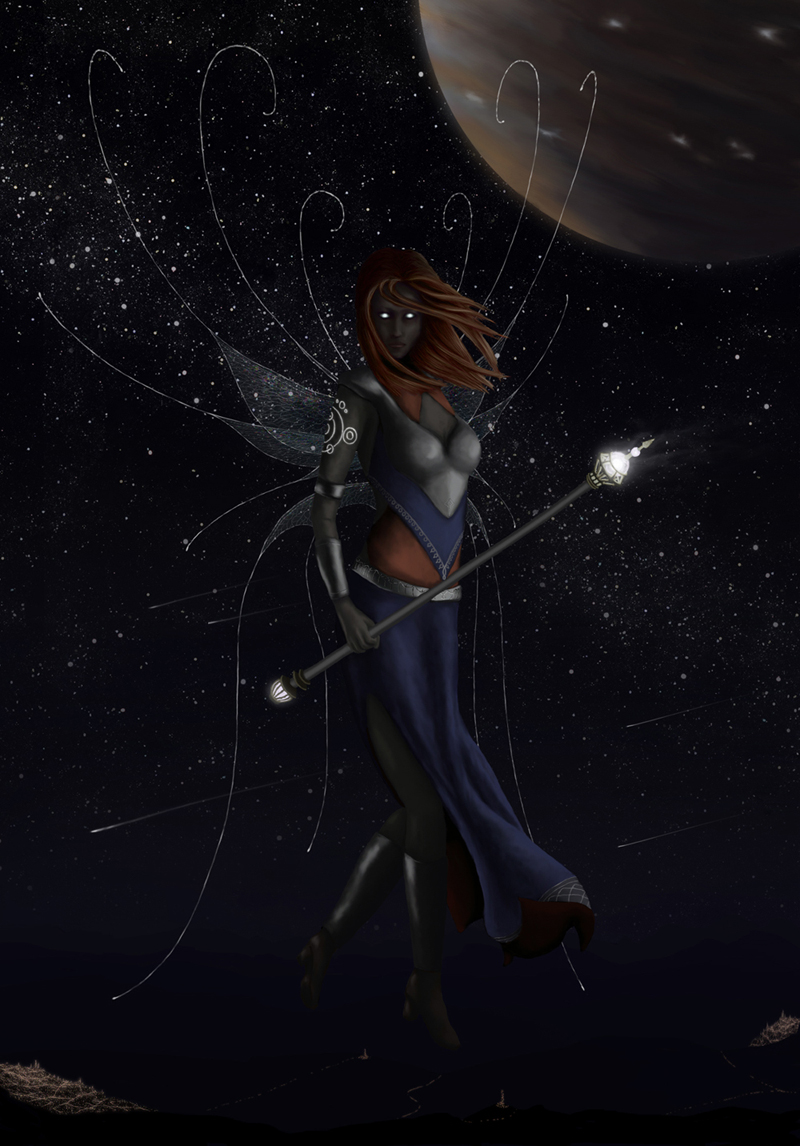 Done entirely on photoshop. I have no idea how long this took since it was spread out over soooo many sessions over a very long time.

Well, originally I had my Star Fairy picture, which I started to hate within a few months of finishing it. I ignored it after that until several months ago I decided to do another fairy based on her. Through different design phases it changed quite a bit, as these things do, but the original themes remained. I named her instead of adding a descriptive title - that might have gotten repetative. My first named character!

Instead of forests, lakes and mountains, this fairy prefers the depths of space, resting on mountain top or drifting asteroids.

Detail - I love this picture mainly because of the beautifully done 3D feel that it has about it. The character itself is indeed rather interesting and charming in it's own way, but I think the touch of three dimensions really added to the picture's beauty as well.

Character - The character itself is a rather interesting concept as well. It has the basic form of a woman, and the wings add a touch of supernatural to it. I also enjoyed how the wings expanded only a little bit from the body, and the strings of them continued outward.

Background - The background element was a nice touch. It fits well with the dark toned character, and really compliments it too. I love cold color pallets, and this does a really nice job of making everything soft and cold looking, with mixes of blue, black and grey. Very well done!

Overall - Wonderful piece of art. You should be proud of this as it was well done, and it seems like it would have taken forever to do. Keep up the good work, I look forward to seeing more from you.

First of all, the concept of a "Star Fairy" is quite interesting. I'm not sure if it's been done before, but I've certainly never heard of it before, so I'll say it's original.

The background, which consists mainly of stars, looks awesome. It's very detailed and and adds much to the artwork. I like the diagonal streak where the stars are more concentrated than usual, it made the background a bit more interesting. There are quite a few other details which made the background look good as well, such as those shooting stars.

The gas giant is another interesting detail, but this time, it takes a bit too much attention away from the character at the center of the artwork. Perhaps by making it a little further away or changing the way it's lit up, you could reduce this effect.

The character appears to be floating over the surface of a rocky planet or moon, which looks better than it would if there wasn't anything below her. Not much can be discerned about this planet, but I suppose it's best that way, as that could have taken a bit too much attention away from the character like the gas giant did.

The character herself, Alatheina, looks excellent. She's quite detailed and well shaded. I like the way her eyes glow, and her hair looks good too. The wings are one of the best features. I liked those strands at the ends of them. I felt the wings would have appeared too short without them, and simply making them longer probably wouldn't have worked so well.

Her outfit, while it certainly isn't poorly drawn, wasn't very interesting to me. It looked good, but not quite awesome. I really liked the metal part resembling a belt around her waist though.

The staff is another favorite part of mine. It's not as interesting in the middle, but the ends look great. I love the way they glow, not to mention the intricate details themselves.

A difficult subject matter to capture the essence of, with the dark skin and the light eyes, meaning that the lighting struggles to show the features off. Couple that with a dark background and you have issues with projecting the piece out. This difficulty could be compared with that of drawing a ninja sneaking about.

The level of detail on the gossamer wings is fantastic. I love the intricacy of them - the only shame is that I can't quite get close enough to see the level of detail. I wouldn't personally have had the wisps off the wings, they look a little weird.

The stripe of stars doesn't seem like anything I've seen outside of a deep-space setting, so to see something in an inner space, or perhaps galactic outer space setting just seems slightly unusual. Though it's just a personal preference, I'm confused by what I've just said and shooting stars, which would indicate a meteor shower, most certainly an inner space phenomenon ;)

The gas giant in the background was a nice touch, though with the light, this does dominate and distract from the fairy, so focusing on the main detail needs to be what you concentrate on in future pictures of this particular femme.

Finally with regards to the lighting again, the staff seems to be iridescent. If this is the case, it could have helped to illuminate the facial features of your character here - I want to see the cold, emotionless visage in more detail, so that I can assess what she is trying to think.

Now, get on and draw a Shaktar!