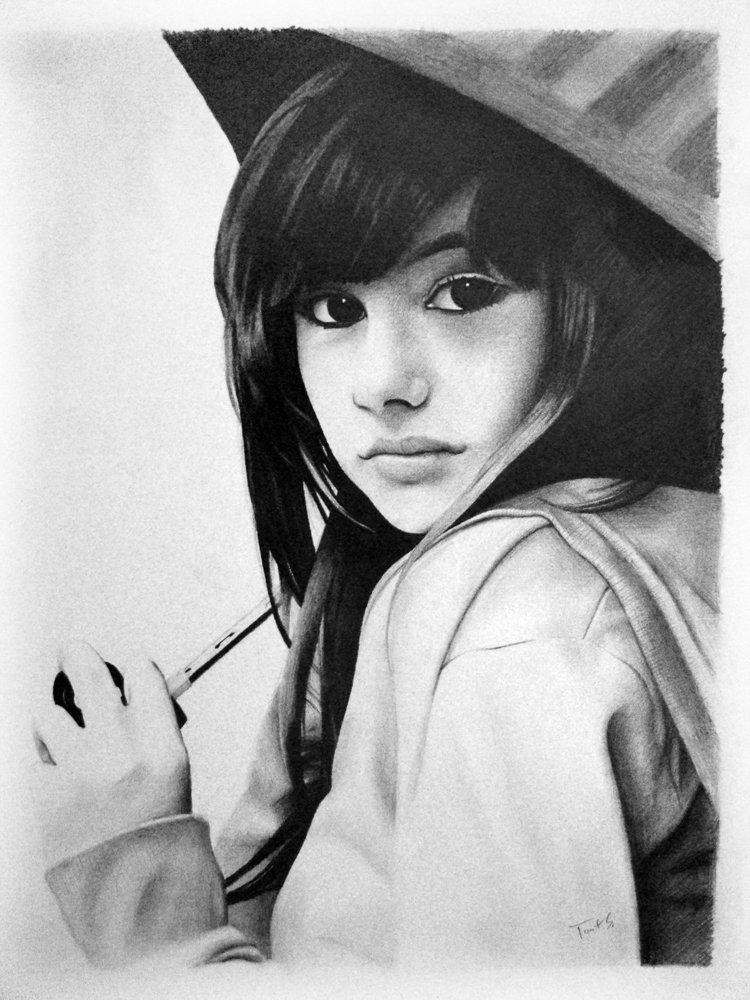 8 Hours of work, with reference.

2 words for this: HOLY CRAP.
This picture is so fantastic. You have such an incredible amount of talent!

Now first off the clothing is done fantastically. If I didn't have the eye I do I might mistake that for a photograph if I do not look at the face or hair. The hand is also done very well. Hands are generally thought of to be the hardest of anything to draw for just about anybody (with a few exceptions) and you hit it spot on..well...damned near anywho. Much better then I can normally do. But.

For all the fantastic portraying of shades and the great fuzziness of that shirt with the tiny little details with the cuff of the hand (hoho) there are some minor problems with this one.

I've said with a couple of your past works that you needed more of a sharpening between the lighter and darker shades. Maybe even the contrast of the picture was off overall. Now here you look like you started with a neutral grey and moved from there into the incredibly dark black hair (well-detailed..if a little stiff to the eyes in some parts [hey, nobody can be perfect everytime]) to the incredibly white skin. I say incredibly white because even though you did do some well placed shading on the light sources I felt that it was somewhat incomplete in the sense that though you darkened where the hair overlapped and lightened where the hair did not that the general sense given is of a shade off overall. Don't get me wrong, its finely done and could pass as a oldstyle still frame from awhile back (forget the dates...10s?...meh). But some minor details such as the decisiveness of the nose, the very slightly flawed right eye (it was probably like that in the picture I know.) and the feeling that the shading around the face feels incomplete brings the score of this one down to a 9 (I rounded up).

Really though, except for the far left side of the hand there is nothing I can really nitpick about here. I certainly couldn't do any better. Heck, nowadays I probably can't even do this anymore XD.

FANTASTIC detal on the clothing though. THAT almost brought me up to a 10/10 regardless of what I thought with the face. Some crazy detail there.

A bit hard to follow completely, but I understood it for the most part.

I really don't have it perfected yet, so I started shading the face first. At the time, it seemed like the values were fine. Then I shaded everything else, and afterward I realized the dark areas weren't dark enough. I'd actually went back to darken it up, and here it is. Of course, again, it's still not good enough, but I'm afraid I might mess it up if I continued on. :x

As for the eyes, I really couldn't do much. The picture didn't show any hint of pupils, so I kinda just went with it. And yeah, I messed up a bit on the right eye.

Clothing was shaded and filled last, made for an easier estimate as to how dark and light the values would be, which would probably explain its greater detail.

Thanks for ANOTHER (lol...) fantastic review! :D

I'm currently working on a new one, hopefully I've learned from my past mistakes. I'm sure you'd love reviewing it.