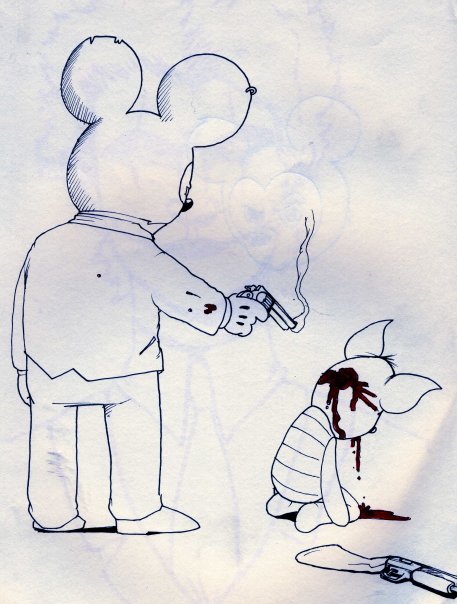 this drawing was based on a very violent script that me and a friend (matthew) wrote. it was about mickey mouse' rise to power and evil... this drawing is of a scene when he executes piglet during his final battle.

piglet briefly fights along side mickey but only kills one man before falling on his knees and crying so mickey decides piglet is just not cut out for going on a murderous rampage so he shots him in the head.

~~REVIEW~~
OK well this was notbad, this is actually pretty neat and i really like the fact that you have some {COLOR} in this one and not all of it but just a bit, and what better way then some blood, now as for the drawing itself it was abit tough since its mickey and all but this really tells a story maybe mickey was fed up, it kinda reminds me of a mafia scene of some sorts but in this case its disney mafia haha, the body and head of mickey seem abit off maybe the head should be more rounded and the body also, i would have liked some sorta backround aswell i suppose, maybe disneyland in the backround somehow, just for the setting, So there was a few suggestions on how it might seem better but i do understand it was more of a sketch then anything else, but other then that it was impressive, anyways keep at the awsome drawings and paintings.

this is a seriously old one dude.

in the world of cartoon animals...

its the survival of the fittest
its a dog-eat-dog mouse-shoot-piglet world
nice and funny
have to complement specially on the blood... looks kool
BYEEE!!!!

is a prime example of the art portal. You pass the test.

oh thank god i was hoping i did cause i have already posted loads of other stuff. thats a huge load off my mind

It's funny AND messed up. And rather well drawn as well

funny and messed up seems to be a combo

You were right it wasn't poo