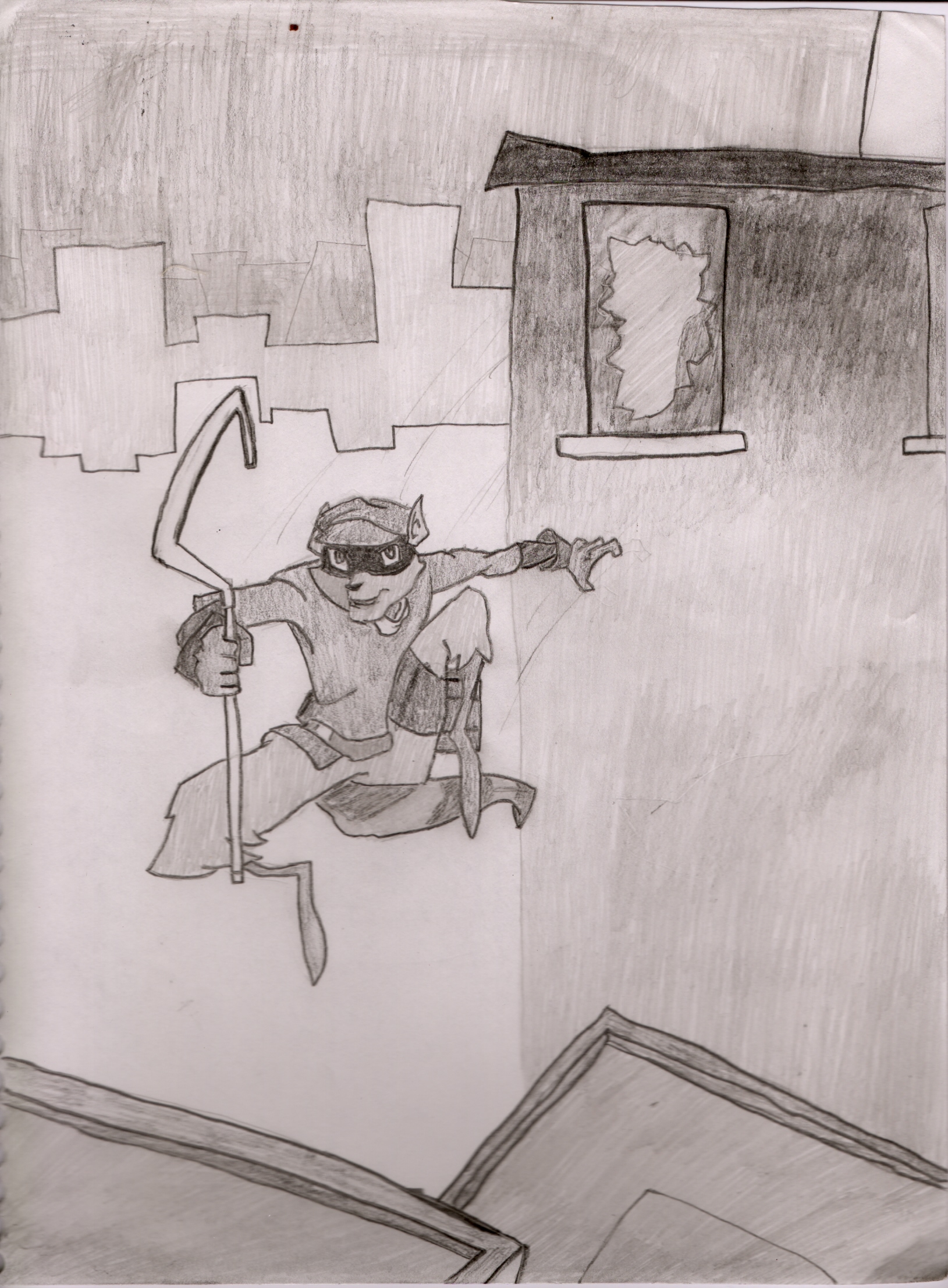 I drew this with 4 graphite pencils

then scanned on my printer scanner thing

but thats not decided yet!

please give feedback, first, not exactly (but almost) finished drawing

More details on the buildings you have would be good for example more windows.

I mean you have Sly Cooper jumping off the top floor which is the only floor with windows. The other floors need windows too.

So that's what I got. Really good on what you have though.

Also, the jumping movement is very cool, since it remembers me a superhero, I think that superheroes drawings are way cooler, since they're ficticial, and you can do whatever you want w/ them, and I liked the way you used your superhero, it was pretty cool...

Anyways, I liked the drawing, you made a nice sketch, I wanna see more from you, I think you have a great potential, keep it up, man!!

Black and white pictures always have the problem that there are so few colours in them, heh.

Anyway, the drawing itself looks nice as it is, and I think with some colours added to it it would look very good.

However, the perspective seems to be a bit off with the roofs in the lower parts of the picture. Especially the roof to the lower right looks awfully off, as if the building doesn't fit to the others. And this wrong perspective is what makes this picture look sketchy to me.

Also the lower part of the legs of Sly Cooper look too thin. Maybe it's what he looks like in the games (I haven't played any of them), but in this picture it looks as if he will break his legs once he lands because they are simply too thin to carry his weight.

...I prefer your music more than your art xP. Still, what the heck, this is a decent sketch. You can see that it's drawn by someone who's pretty much a beginner at sketching, especially when looking at the buildings, but this still is a cool art piece :D.

Well, as the others have said, adding colour will really give life to this submission. Right now, the picture looks cool, but it's a bit dull. Adding a few colours will make this piece much more interesting and fill in the detail that is missed out as it is now. That being said, the shading was really good, except for that little nitpick Coop83 mentioned about the fact that you shaded in different directions. Other than that, the shading was impressive.

As a picture, this is pretty well-drawn. I was really impressed by how you drew Sly Cooper. His stance was excellent, and he looked amazing. Just one little thing, though: I think his tail looks rather weird. Maybe it's its angle: the fact that I'm expecting his tail to be hanging at a 300-ish degree angle and not sideways when he's flying through the air. Still, other than the slightly awkwardly placed tail, Sly Cooper was brilliantly drawn. As for the buildings, I'll say this without beating around the bush: they were terrible :P. Lol, what I mean is, the perspective of some of them were way off such as the ones at the bottom, and the lines were rough and as if they were drawn in a hurry. Ruler, much? xP. Also, I totally agree with XwaynecoltX about the lack of shattered glass.

Overall, I like this submission. It's well-drawn, and shows that music isn't your only talent. Still, it has a few defects, but practice makes perfect, so good luck with any future art submissions you might do, and keep up the good work.
7/10

Decent but could be better

~~REVIEW~~
Notbad of a drawing you have here, now there can be some improvments on a few areas, but first off i like the shades and effort that was put into this, and also noticed you put in angle, and what i think it busting out of the window, so there alone you have given your art piece some :ACTION-SCENE: which is really always neat to see in still art, now i do think you could present that better, like when he is busting out the window, now i did notice you did have some wind streaks which is neat but you have to give it the effect that he is really flying out so fast so a few more noticble streaks would sufice, also as for the breaking out part, now if its glass have glass chucks and pieces just flying everywhere might help and give more for the effect of the action scene, Now as for your character drawing it was notbad but could use some refining more improved line-work and character designs tend to take more effort and time, the shades look really good, and i am thinking if you put this through like photoshop and or paintshop pro bringing in some color and even effects like lighting and deeper colors, but anyways you can run some colors through this so it has a more satnding out look and with color it looks much better, well hope you found something from this review, good luck on your next entry.

~~THINGS TO IMPROVE ON~~
I suggested a few ideas like shattered glas, more wind strokes, some color, and effects, and more refining of the drawing itself,