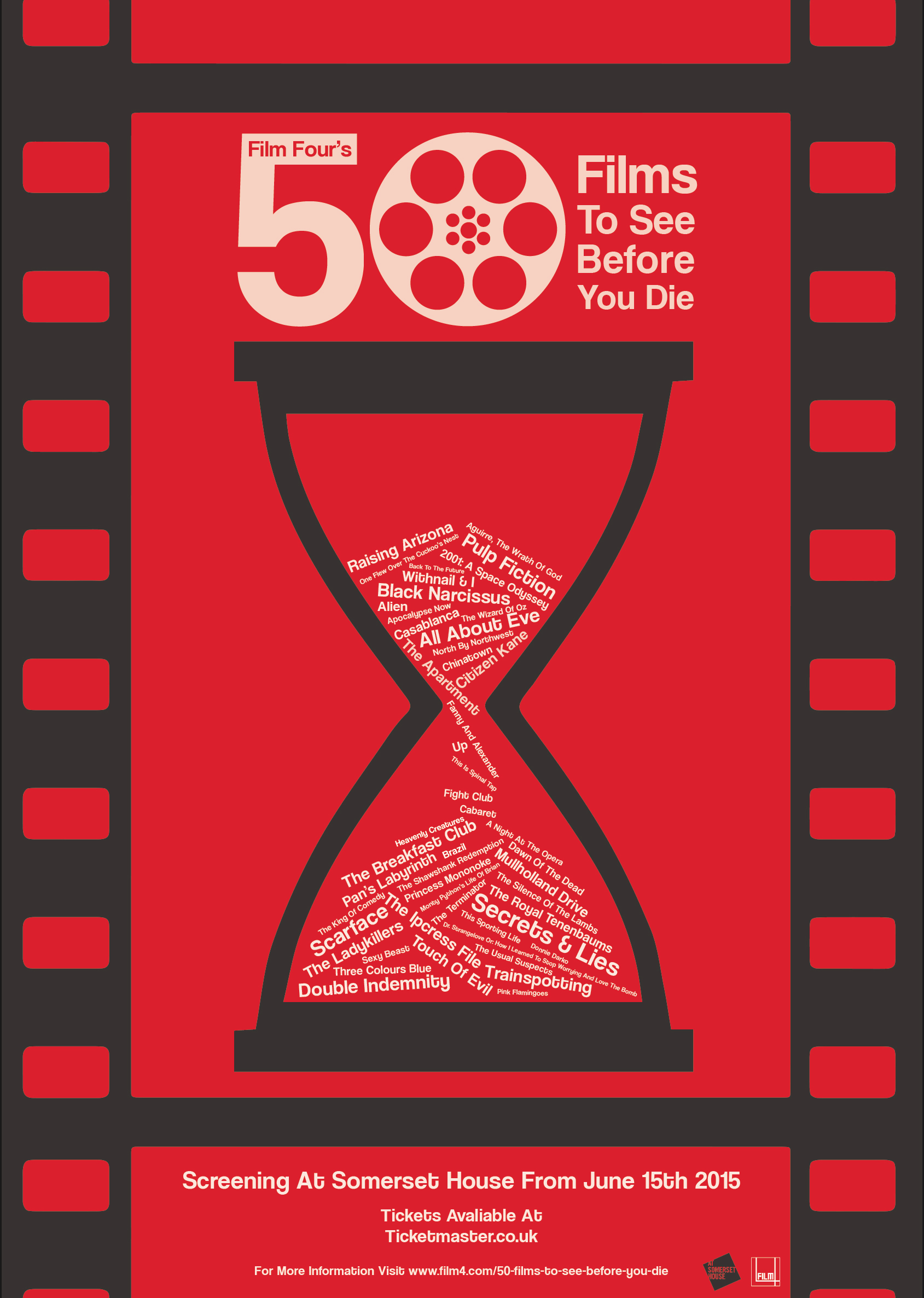 50 Films To See Before You Die

For this assignment I had to promote Film Four's Fifty Films To See Before You Die and the (fictitious) screenings at Somerset House.

Have you seen them all? Is your favorite film on there?
Mine isn't*.

* My favorite film is American Beauty

Shit man this is pretty bomb. Ive been needing someone to design a few promotional posters for musical events my Garage-level record company is putting on soon. Id love to commission you :)

Commissions are always welcome. Feel free to drop me a PM with the specifications. Alternatively email me at decky1991@live.com

This is a nice promotional piece mate.

Let's see, out of these 50 films I have seen... Pulp Fiction, Aguire, One Flew Over The Cuckoo's Nest, 2001, Back To The Future, Withnail & I, Alien, Apocalypse Now, Casablanca, The Wizard Of Oz, Chinatown, Citizen Kane, Up, This Is Spinal Tap, Fight Club, Cabaret, Dawn Of The Dead, Brazil, Pan's Labyrinth, Shawshank Redemption, Scarface, King Of COmedy, Trainspotting, The Usual Suspects, Donnie Darko (almost didn't see that one - I mean the text is tiny for some of these), Silence of The Lambs, Princess Mononoke, Life Of Brian, The Terminator aaand that's it. The ones I remember at least. I went on a marathon of old classics a few years back so I might have seen more but that I don't recall the titles of.

If I'd list 50 movies that must be seen I imagine the list would be a bit different though, a lot of martial arts classics, a lot of action, more movies that mess with your mind (well, Fight Club's a good one in that category). Current favorite is without doubt Inception, and among other recommendations I think I'dinclude Looper, Bad Boys 2, Addams Family and Chennai Express. In the list about Scarface is probably the one movie that impacted me the most; Al Paccino's most impeccable performance. Aaanyway, this was a nice poster! Though it would've been cool with some imagery, a collage of posters or something, since titles aren't always at the top of your mind. Nice work.

I know what you mean about the collage idea and some of my earlier sketches were leaning towards something in that vein but I really wanted to do something as a homage to Saul Bass. As for some of the text being small when printed out at it's A3 it's all clear, maybe it's the PNG file. Also I wasn't going for the titles to be read by that I mean that they are the lowest in the hierarchy of information.

Keep watching those films man and cheers for the review.