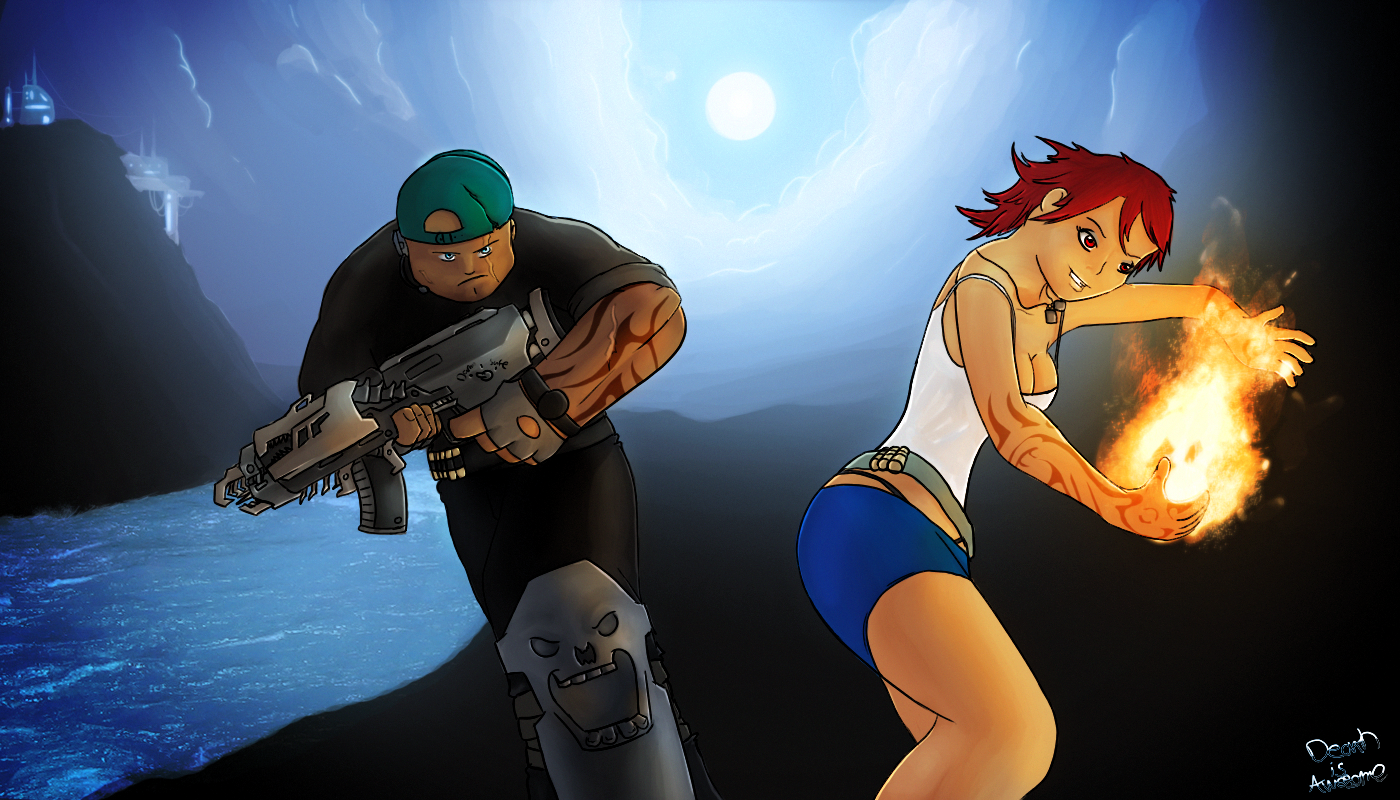 Full view it!
Well, another art without any meaning at all... enjoi :D
Done in PS with a trust tablet, texture for the water found on teh internets.

But if you don't mind, I'm going to be a little critical to help you improve.

Consider the guy, "NOT-Marcus". Let's say that the direction facing out from the front of him is zero degrees. His hand supporting the rifle looks like it's accommodating a rifle at 45 degrees from him, and the rifle is pointing almost exactly 90 degrees. By having his fingers arranged in that way, it's implying depth to the guns dimensions that simply don't seem to be there.

I understand practicing in your weak-spots...it's why I draw legs, feet, and noses a lot. But people below me are just like "ehh, work on drawing humans" and not pointing out what looks "off" to them. Allow me to try and elaborate best I can.

"NOT-Marcus" has a bit of a baby-face going on. He looks young to begin with, but having that youthful appearance while having so much...MASS to his head, coupled with wearing a backwards baseball cap just makes him look like a giant pissed off baby with a couple of scratches on his face. The cleff in his chin sort of helps with implying age, but it's not enough...the skin in the wide, vacant spaces in between his eyes/mouth and ears are too smooth. Try adding even subtly defined cheekbones, wrinkles, texture, and even facial hair. Remember at all times when drawing a face, beneath it there's a skull. Someone with a face that big should have meaner looking eyes than just two horizontal lines and a circle within a circle. Proper use of shadowing could help with this too, but moreover study how eyes could look...research for your character and then make it your own based on what you SEE.

The girl is just baffling to the situation in my opinion. I mean, the scenery behind them is nice and serene, but he has a gun and looks pissed off while she has...heh..."firearms" ...there's no visible enemies in the shot. Not even bodies of conquered foes, or any sign there's a conflict at all. So either these two are running into battle with a purpose, or HER arm spontaneously combusted, NOT-Marcus is running away from her afraid he'll get burned, but she's totally into it because she enjoys pain.

I mean...what's her story? I fail to see the tactical advantages of hoochie shorts, a thong pulled up high, and a white tank top for battle. Even NOT-Marcus seems more geared for a Slayer concert with his lucky John Deer hat than he is ready for combat...the only items that even remotely imply "war" to me based on their clothes are belts that only seem to hold a limited number of bullets like for a revolver in the wild west...and I don't see holsters on either of them. Hell, with her, ALL she has a thin little belt that either holds 3 .45 Long Colt bullets or 3 Triple-A batteries...and I don't see a dildo holster for her either, but I imagine she's gotta do SOMETHING for herself when NOT-Marcus is around...her arm appears to be an effective Icy-Hot for those long lonely nights.

Finally, it's their body language that's kinda awkward. Look at the bandages around NOT-Marcus's enthusiastic skull knee armor...now look at those same bandages that are supposed to be the leg in the background. Because they're similar in size and angle, it almost looks like he's a creature with one fat armored leg to hop around on instead of him running with one knee in front of the other...which, I might point out, is a really odd way to run when you have bulky armor around your legs...

She doesn't look like she's running as much as she's about to fall over, captivated by the camp fire in her palm. Her tattooed arm, if you look at the line that leads up to the shoulder, I don't think that should be a solid line...there should be a break, even a small one, right after the back of her armpit. Moreover, we got contradicting perspectives, looking down her torso for her breasts and looking directly beside her legs...if her waist and legs were at that angle, we'd get a different picture for her torso...but I'm all for getting the cleavage in the shot, so the legs may need to be revised to compliment that perspective.

I have to start with saying that this is probably the most awesome comment ever! Thanks for taking the time man :D

True, I tried to get that right untill I finally just gave upp :/

Alright, I'll do a big sketch full of faces, with a skull under, no big babies here :P

As for that, it's more like they're a team, though it's hard to explain exactly how I thought. I might develop that for later art, but for now, she's something of a mage or wahtever while he is some sort of "guard".

LOL, well, I felt for drawing that way :P

Well, that is only one leg you see there, maybe I was to subtle when I drawed that though.

Good point, I'll try to have that in mind for my next pic :)

Big thanks, most helpfull review ever :D

You cerntainly have a future.

All this needs is just a little polish and you're good!

The water is exquisite and the gun is nicely detailed. The flame effects are spot on, and overall a great concept.

They facial structure could use some work, and the girls back seems a bit off. I can't put my finger on it...

Other than that, good posing great tattoo work and I love his muscles.

Yeah, I'm not that good at faces, or drawing humans at all, so that's why I drawed it, I need more practice...

Fire thing is sorta magic or something, I lunno. And yeah, I need to train on drawing humans much more :/