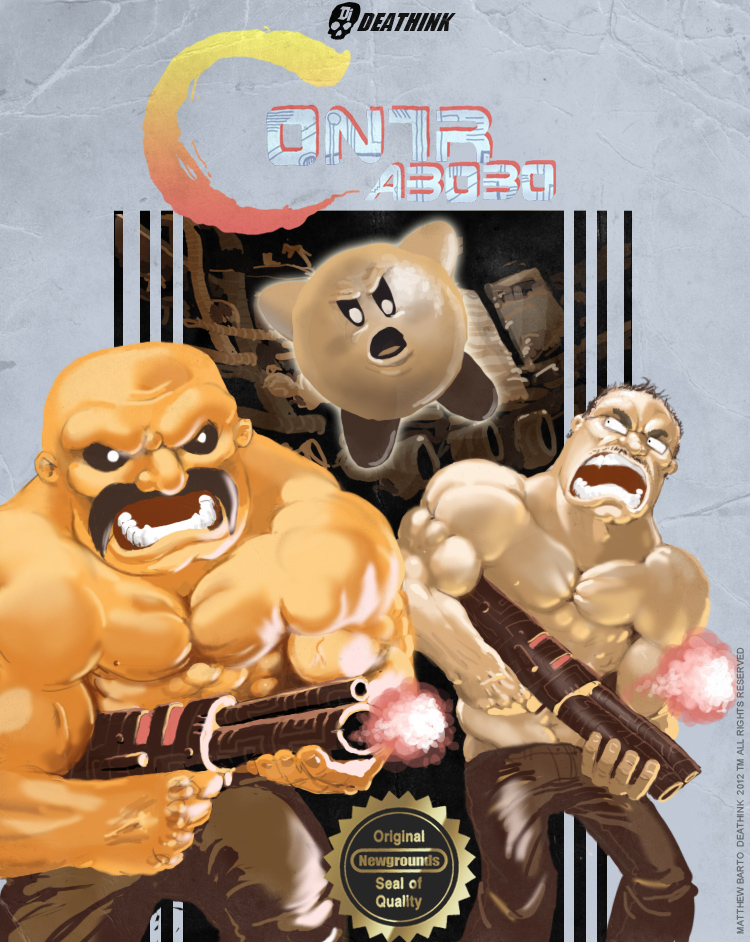 Play Contrabobo today! The 8-bit hyper realistic graphics will melt your brain! Only for the Newgrounds home entertainment system! Newgrounds, now your playing with POWER!

I have been wanting to draw Abobo ever since I seen the "Abobo's BIG Adventure" trailer, so I had a little contest... I would draw whomever was the first to PM me with all medals achieved in Abobo's BIG adventure (I called it "Abobo's BIG contest"). I anounched the prize would be a drawling of the winner beating Abobo's ass, but I was really just going to draw a caricature of the winner getting his ass beat by Abobo in the PunchOut ring (I thought it would be funny), however, when I asked him what his favorite stage was he answered "Contrabobo". A huge Contra fan myself, the Contrabobo was the stage I was most excited about, and at the last second I decided I would paint a variant mock of the NeS cartridge box (Ahhhh... nostalgia) and things just seemed to fall into place.

whats with kirby? lol was he in contra? XD
ps- nice newgrounds seal of aproval, ive seen the SPHEAL of aproval, b not newgrounds. lol

If only a full game version existed

Yes, of what would happen if a full game version of Contra Abobo existed, the game's box alone would look just like this, the cartridge alone would also have the same art as well.

As for the game, the two Contrabobo stages from Abobo's Big Adventure would also appear in the game and the other stages from the original Contra game would also appear with the noticeable differences as Kirby serves as a boss in each stage among with some of the original bosses from Contra serving as sub-bosses, and yes Abobo will still be able to use his special from the Contrabobo stage, his side-kick would get similar, plus a power-up that allows them to take forms into Probotector Mode (or should I say Abobotector) which allows them to withstand hits before finally going down.

Another thing I also should add, it's own 2000 score Medals list on the scale of Abobo's Big Adventure, woot.

This Contra artbox parody will make anyone more manlier than they could possible imagine!