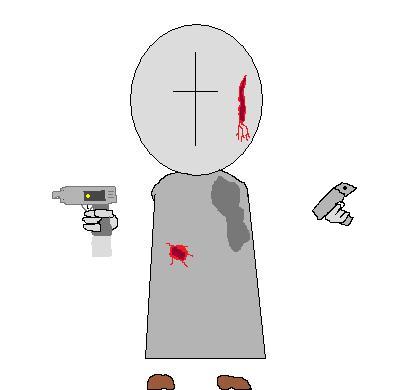 It really does need some work. For one, the body parts are unproportional to one another. The feet are too small, and so are the hands. Then the head seems too big for the rest of the body as well.

The body it's self isn't really that bad. The only thing I think that is bad is the on the left part, it looks like you made it sort of round for the shoulders, then you made it go down in a striahgt line, and it makes it look bad compared to the other side. Every other part of it looks okay, the little blood wound and the sweat stain(I'm guessing).

The feet look wayyyy too small for the body. They need to be at least two times bigger, and if I'm not mistaken, part of the feet are supposed to be under the bottom part of the torso, but i could be wrong.

The hands don't seem that good that good, because they look small and the fingers are odd looking. For the right hand(holding pistol) it looks like another left hand. Then the grip of the pistol seems to curve a little.

The hand holding the pistol does seem unproportional also, but only a little smaller than it should be. I think that the uzi he's holding also could be bigger, but the detail that you put into it looks pretty good. Try to do that with the pistol also.

thanks, this is just what i need to make picture pefect art work