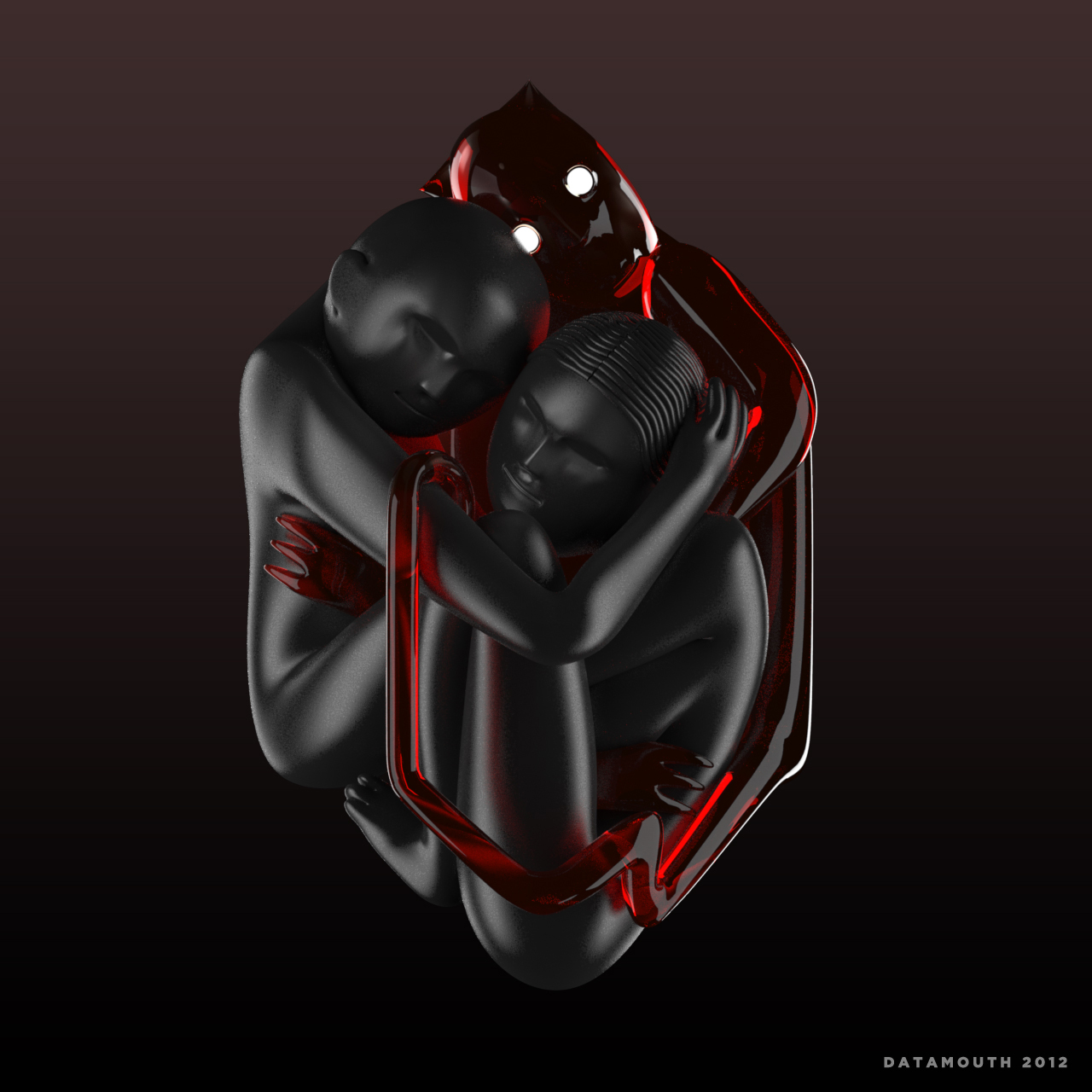 this will be the final of the "cubic embrace" designs. wanted to create this in 3d. it was fun. took me around 10 hours to model, not counting texturing, render times, or photoshop. done in Modo 501.

Just excellent. VidGameDude has the best content analysis, so I'll focus on mechanistic comments, perhaps straying into content and meaning here and there.

The demon's eyes are perfect with their inhuman roundness and flat, featureless, glowing white color; it gives an otherworldly look of cold and apathy that mixes with the red to suggest a detached malice. The demon's partial transparency and sharper specularity/reflectivity really makes it stand out from the two human sculptures.

The humans material is softer, where the specular reflections and actual reflections are muted and blurred; they aren't made of polished ebony, but more like an iridescent stone.Their features are softer, too, bespeaking contentment and a relaxed comfort. That is mirrored in their entwined fetal positions. If their faces were the least bit tense or worried, the whole image would be completely changed and I would get a sense of terror of the demon. Your choice of expression on the humans suggests safety instead. And all of that is done in a minimalist style, where a line here, a triangle there, and a circular hairline are used to construct a complete and expressive face.

The rest of the details are adjusted to maintain the sense of softness for the humans and harshness for the demon, but it mostly fits in the constraint of the cube. The cube, of course, is the central idea: the simplest element in a space of 3 dimensions, enclosing the 3 simplest components of humanity.

I encourage you to keep exploring the 3D avenue. It will be fascinating to see what you can do!

thanks man, thanks for the really awesome review. i like how you tie in the texture to that of their character and identity. the demon being "sharp" while the human bodies being "soft and iridescent. thanks for the amazing review m1kclark.

it's simplistic in texture and color, but complex in design presented conglomerating into behavioral unity.

The women is held in regard as the Staple.
She is the bearer of creation, the compassionate, creative, and courageous; yet many, not all, in the world of men, hold her below as a second being, yet cling to her for without woman, man will surely die. Status is brought through downgrades and perspectives are limited. Such views of weakness tests the strengths of females and only those who endure prove far greater as equals to man, or even successors.

The Man is held in regard as the Medium
He is the wielder of ambition, the amenity, advancement, and aptitude; Though many hardships are faced, obstacles will never sugarcoat facts of making forefathers proud, educations achieved, jobs secured, families made, and wars won. The stresses and pressures of living up to be nothing less than what society's stereotypical expectations shape them. These are tests as well those of few wills may truly pass rather than to let sanity slip and their happiness turned to harbinger.

The demon...The deterrent
But i think that's best left to everyone's imagination on what slain devils must be brought forth for the edification of humankind's struggle with temptation.

amazing review VidGameDude!
seriously, you really put effort into what your description of the work is. and i must say it's pretty awesome. i get alotta different explanations of what this measn to people but none have been so detailed as yours. simply awesome.

thanks for the kickass review VidGameDude.

this is really great. i love looking at the progression of the design on your page. what did you use for rendering? the red glass looks great

thanks SPace!
i used Modo501 for both modeling and rendering. Modo has an amazing rendering system.