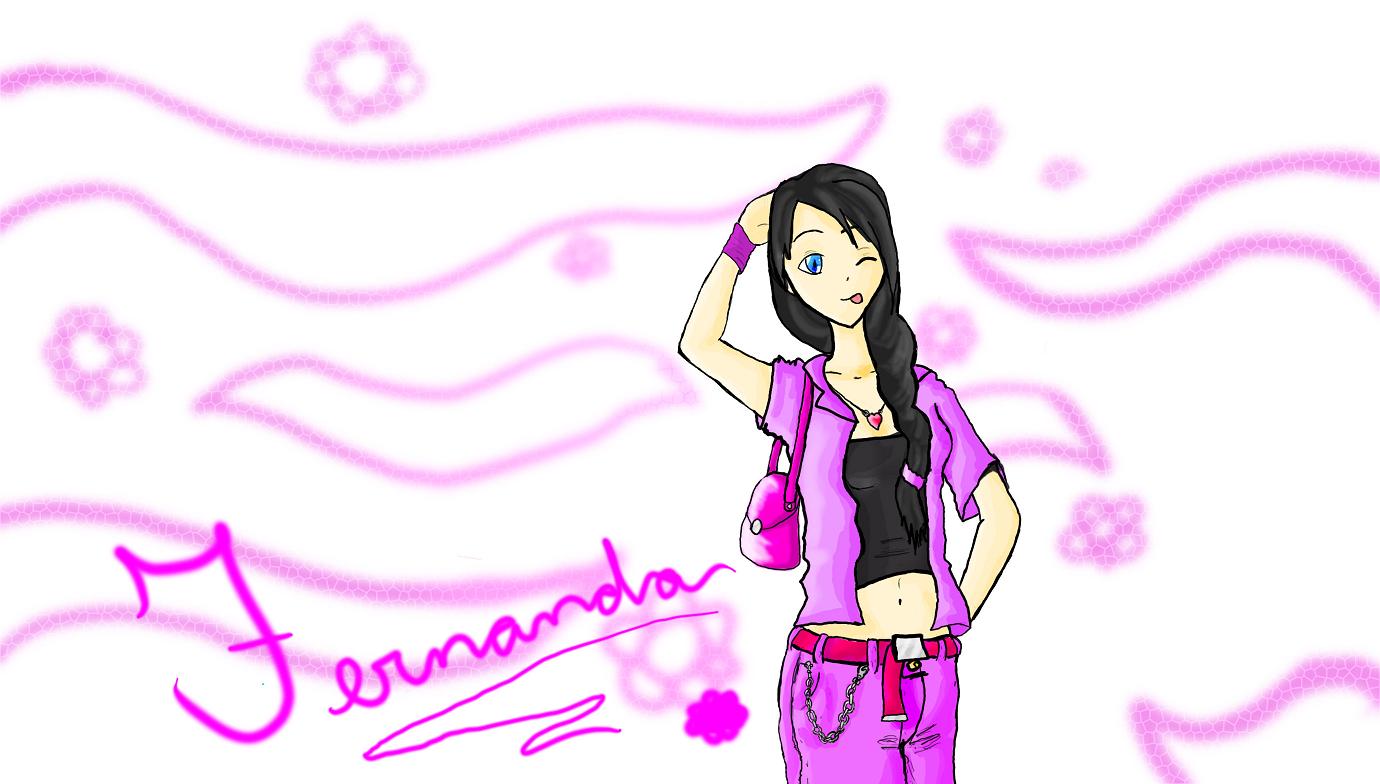 SO, this is a drawing for a lady friend of a lady friend of mine, but i guess she's my lady friend too now. She asked me to draw something cute, and well, she is pretty cute. P.S: The background was proposital, not my lazyness. She wanted something to match her Orkut page (Orkut is a social website, like Facebook, but Brazillian) wich is pink with flowers and etc. etc. Hope you guys like it

I think the pants are very well done. You've got the lining for the seam there and they aren't perfectly straight or whatever. The shading on the pants also looks pretty good. However, you might have too many belt loops, though I can't really say for sure. My observation with pants in general is that there's a belt loop at the start of each front pocket, another one near the end of the pocket, and one belt loop on the back at the middle. That's not really an iron rule or anything since different pants will have different designs, of course. This certainly isn't a mistake or anything, just be careful about how many belt loops you have and maybe check out some different pants to see what they're like. I also sometimes look at the shape and design of the back pockets on pants since they're quite different from one pair of pants to another. I think you have the front zipper flap thing ending too low, too, but that's the same situation - it varies from pants to pants, so it isn't really right or wrong. My zipper flap thing ends before reaching all the way down, personally.
The chain links aren't perfectly even, but I like how you actually drew them instead of doing something simple like having little circles that aren't even connected. You even drew the little clip thing at the end instead of just ending it with another chain link, that's some pretty nice detail.

The pink top has a pretty good shape overall, , but I think the sleeves and shading could be done better. The sleeve to the right isn't too bad actually, but the one to the left doesn't look too convincing. I'm not really a pro at drawing rolled up sleeves either, and I guess how you do it depends on your style. With my style, I make the folds and creases in the clothing pretty noticeable since I actually draw them (I think making them noticeable with just shading/colouring looks better, though). Either way, the point is that the folds need to look more distinguishable - however you choose to do that is up to you as long as you can make the rolled up sleeve look more convincing.

Now for the shading... It's helpful to decide on a light source before you start shading so you can keep it consistent for the whole picture, though sometimes you can get away with a sort of "generic" shading. In this picture, it's as if you've got a light pointed at the side of her body, one pointing up from below her, and one pointing right at her face. This generally doesn't make much sense. This also ties into the folds on the clothing... The pink top doesn't seem to have any fols, but the outline of it shoes rough edges, which means it has to be folded up in some ways a little. Light usually comes from above (the sun, ceiling lights, street lights), so you should generally shade in that way. For example, the breasts stick out and light hits them from above - the top has light on it and a shadow is cast underneath. You've got the bottom of her breast lighter, but it should be darker, and the top area should be lighter. It would be the same for the pink top's folds around her waist - the top of the fold would be lighter and the bottom would be darker, and it would sorta go inwards towards her belly button so the fold looks more like a fold instead of some bumpy thing. Same for her raised arm - the bottom half of the rolled up shirt would be darker and underneath there (around her armpit) would also be darker. The inside of her other sleep would also be darker since that would generally be underneath her shoulder/arm while the outside of the sleeve would be lighter because nothing is blocking the light source.

I'm about out of room here, but the wristband could wrap around more like it was wrapped around a box shape to seem less flat... whatever that means, haha. Good proportions as usual, no room for arm comment.