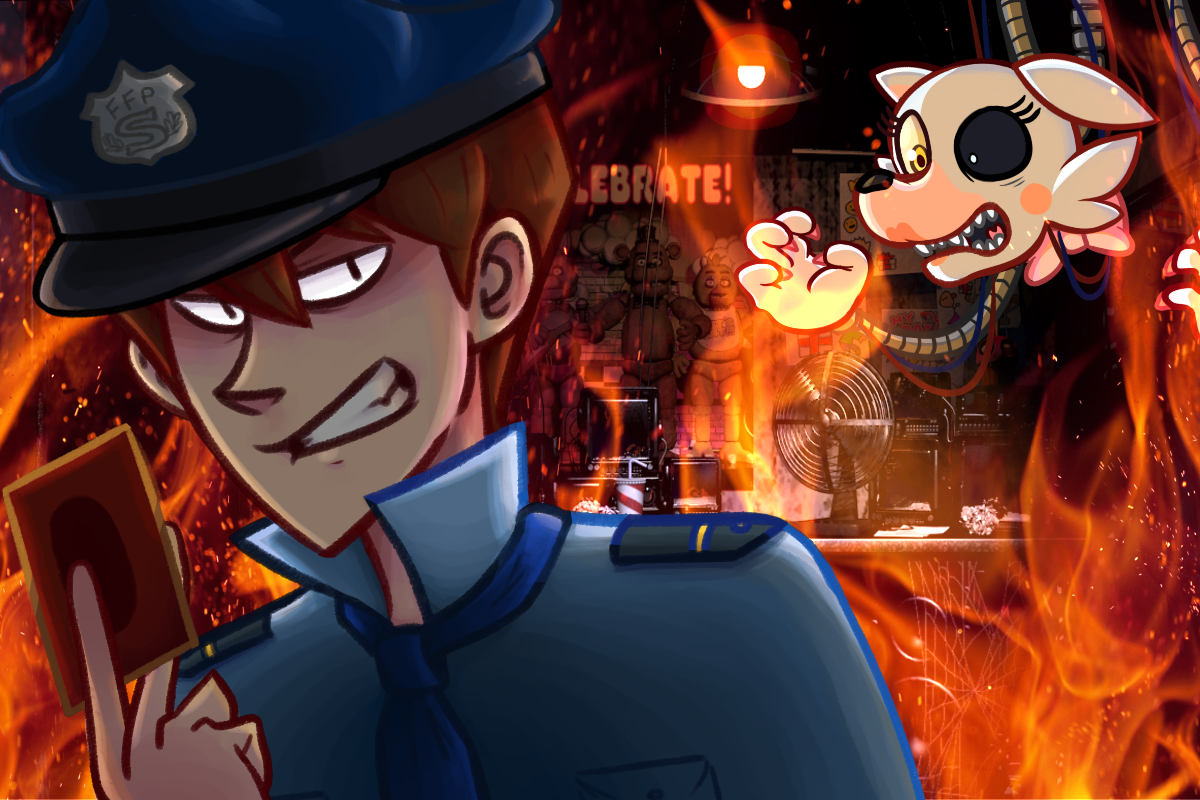 I had a lot of fun drawing this. I've never played FNAF though.

Your Mangles just so cute. why's the guard holding a yugioh card?

I Like it :) do you ever consider doing vector art? Your style would compliment it.

I did years back. Though if I did stuff today it'd look a hell of a lot better. (thank you!)

You have a pretty strong and dramatic composition going here, but there are a few nagging issues with this drawing that are holding it back. The most glaring of them is that you didn't draw everything yourself, I get that its a fanart mash up thing, but the background and especially the fire should be drawn by you. Not only is it just a better thing to have drawn it all yourself for the experience of it, but also it would make everything look much more cohesive; right now you have a cartoony anime thing going on in the foreground, a realistic fire and then another cartoon together in the middleground and you have a 3D rendered desk in the background. The mixing of styles like that could work in some circumstances, but I think it would just be an overall stronger piece if you did the background yourself.
Past that that as stated I really like the composition here. You get a nice sort of implied strong diagonal line from the security guard to the robot behind him which gives it a dynamic feel. The coloring and lighting is also well done on the guard and and really sells the depth, I think you could have toned down the highlights to better match the fire. Fire is a tricky light source to work with and given the color and dispersion of the fire you used to I would say to dim your highlights just a bit to better match the fire's color, or brighten the color of the fired, the robot in the back even for being simpler is shaded very well. To get even more technical into the composition I think moving that one pillar of fire that comes from under the robot's hand and goes up through it down and to the right a bit and then heighten the opacity a bit so that it isn't "breaking up" the two characters and instead framing the space leading to them would better help to define and guide the viewers from the guard to the robot. Also widen that lamp a bit, lower it and move it left, maybe offset it so that its diagonal tilted with the upward side to the right and it will also help bring out the composition.
Hope this helps in some capacity, There's a lot of promise in this drawing, the shading especially, keep up the good work.