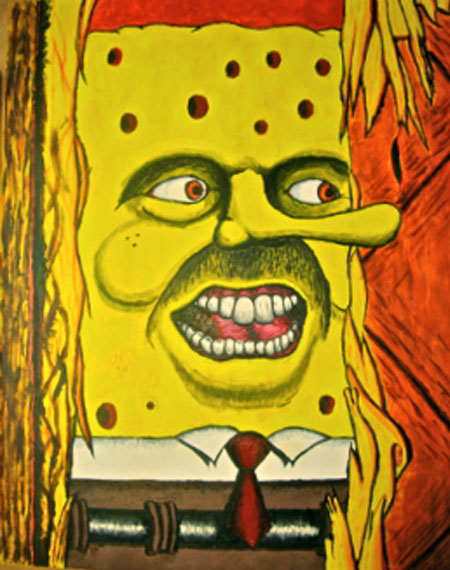 12x18 acrylic on illustration board.
Check out my DA too. http://chieftx.deviantart .com/
comments and questions always welcomed! :)

This is obviously a different take on the SpongeBob character, but it looks nice! The face is drawn well and the color palette is a little dull but it still looks good. You put the shadows in the right places as well.

this is great I love it

i always hate these face

This is the funniest thing I've seen all day! I love how well the creepiness of "The Shining" goes with the child-friendliness of "SpongeBob SquarePants". Overall a great thing for me to see on my 17th. Great job! XD

~~REVIEW~~
OK so this was neat and cool the whole The Shining refreance was another cool idea, the mix of spongebob and the shinning was nice of an idea, you should do more of these movie cross-overs it was pretty good i thought, so good job there indeed, the likeness too jack was uncanny too :) so another good idea there, the whole piece was pretty good i thought, maybe a bigger backround area too show more of the door and all would have been a plus, other then that this was cool. anyways nice job here it was good stuff.

~~THINGS TO IMPROVE ON~~
So while this was pretty good i thought, maybe a larger canvas in the backround too show more of the backround, also would allow more room for detail there aswell.