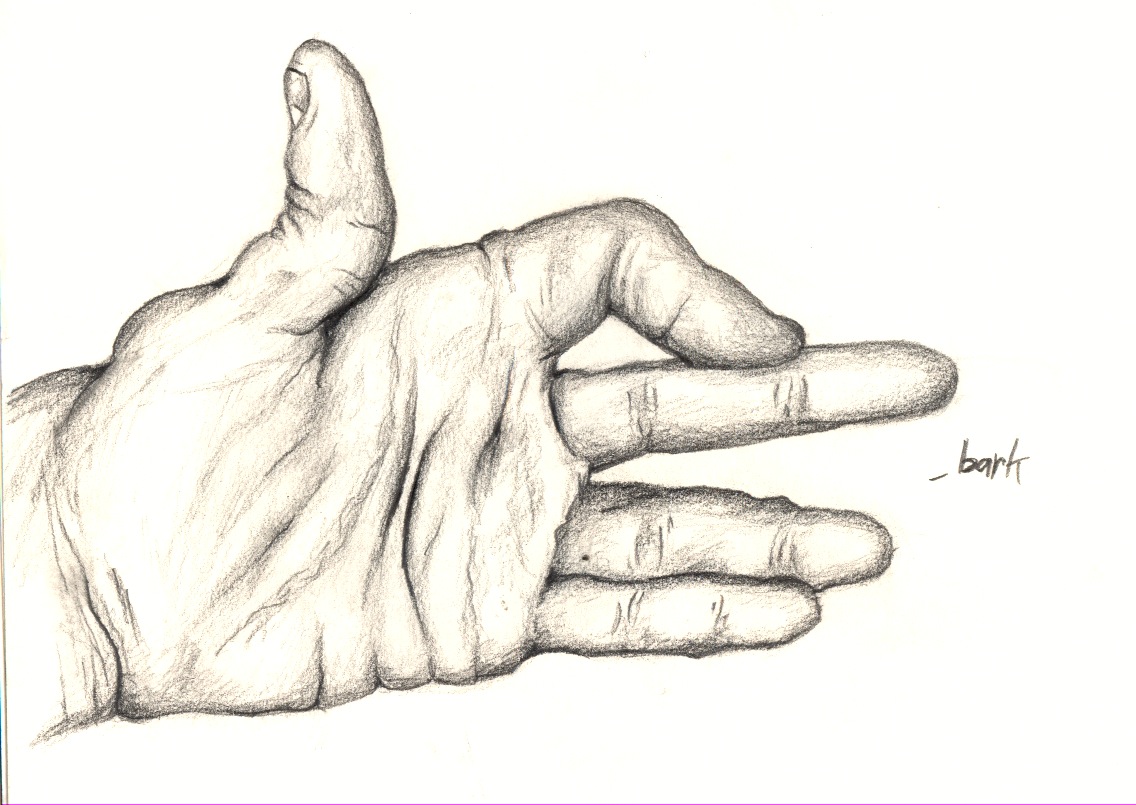 Drawing of my hand...may have taken a few liberties

Well nice hand drawing here the shades the lines, all very good light texture here makes this a pleasent, would have loved some more stuff or focus in the back round but you still have a solid piece here.

~~THINGS TO IMPROVE ON~~
Some focus in the backround maybe even a small point of focus would have worked.

I guess the question that comes along is...

What in the hell is wrong with your hand man? It looks like you are a 50 year old obese man just by the drawing of your hand. XD

Anyway, the details in the wrinkles were rather well. I just don't see this being a realistic hand for some reason, but if you say it's your hand then I guess it's your hand.

The pointer finger looks like it's bending at a crazy angle. Personally my finger isn't that flexible and when I try to copy the movement it gets much deeper. So either your finger itself is very flexible and bends in ways it shouldn't or you should add more depth and make the inside of the knuckle look like it's a little bit father away.

Again with the thumb as well. You either have a double jointed thumb that points in an odd direction or you just didn't get the angle right. If your thumb bends that way then alright, but if not then it seems like it's way too curved to be attached to a hand.

I guess what I would have really liked to see in a picture like this would be something to fill in the dead space of white. Something like your hand being on a surface such as a table or even just a shadow of your hand. Maybe even a little bit of something in the background as well just because the white space makes it a little bland.

Thanks for the in depth crit. My hand isn't anywhere near as wrinkly as this, I just wasn't completely aiming for anatomical correctness. I just made it a lot lumpier because it was more fun to draw that way.

And my thumb does actually bend that far :P

u should make one with a shadow in the backround too

yeah maybe i'm some point when i'm not lazy

You have a wrinkly ass hand. Good other than the excessive emphasis on the wrinkles.

I need to learn to properly moisturize