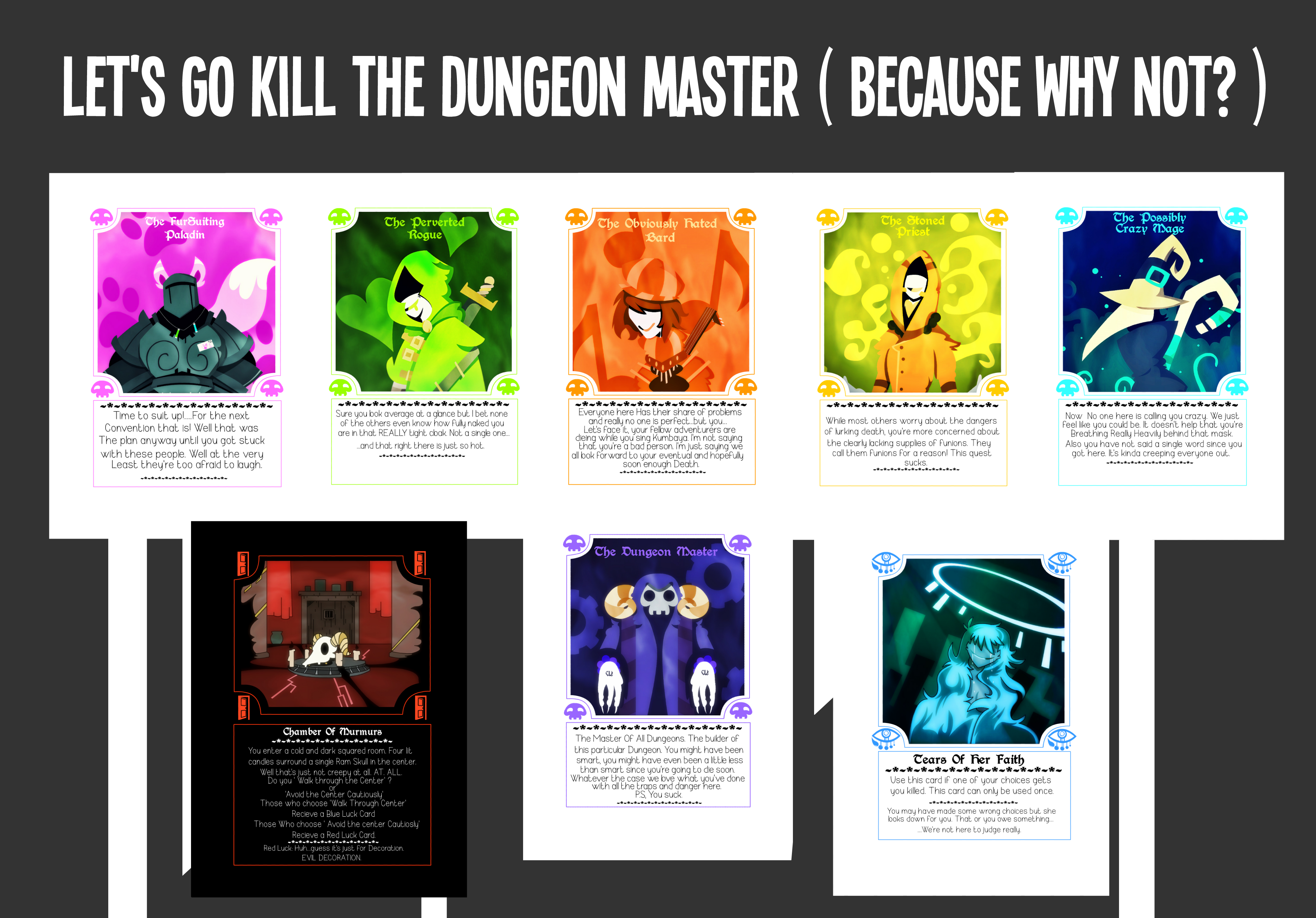 A card/dungeon game I had been working with and still may very well finish. Should the day arrive, chances are you'll find it up on Table Top Simulator and other places.

Hello! If you are reading this very writing right now it either means you are an adventurer seeking riches and glory or you're a thief who took this illegally and without authorization. If you are the former then great! I have been waiting much longer than you can imagine.

If you are the ladder then go to hell. I'll probably see you there. Eventually. I'll assume you're one of the good guys though! So where to begin? Well there is this dungeon and I mean it in every form of the word. It's ruled by the baddest Dungeon Master of them all.

I've never met them myself but I hear they suck, plus they have loads of treasures and relics to be found! Let's not fool ourselves though, first things first you need to kill the dungeon master, otherwise it's going to be near impossible to get out with the loot.

I myself do not need worldly goods, also I have no arms or legs...or really a physical body to inhabit. You do though, you and your friends! So let's make a deal. I lead you through the Dungeon, you kill the Dungeon Master and you live happily ever rich!

Hold it though, let's go over a few things first so you understand what you are really getting into. Now again, if you're an adventurer then you'll need to know this. Thief, again I demand you go to hell.

So I'll assume you probably still are reading this....

Which might mean you are an adventurer. No, no it's cool. You can admit it, you're amongst friends really. At least I hope.
Now I want to be perfectly honest with you new and best friend: I don't think you have what it takes to be here right now.

Hey-HEY don't you dare set me back down!!! Now look, it's nothing but hard times in this box. I mean it! It's a dungeon in here!

No really it is and I'm JUST saying I really think you could do better for yourself than this especially being friendless, myself not included.
Well who am I? Just your friendly wraith box narrator. Doomed to an eternity of purgatory and inescapable need to talk about things. It's normal, just go with it.

So you really think you can handle this? Well I hope you have some friends because you'll need them where you're going. Hint: It's not New Jersey. It's better.

- A Dungeon Card Game of Chance, Reward, Consequence, and death. So much death!

- A fast action and comedic take on the Fantasy games of yore.

- Survive the rooms and their traps to the Dungeon Master! You need to kill someone amIright? Or die. There's that too.

- Play as one of five different and Eagerly Doomed Characters ( Including a Perverted Rogue, A Stoned Priest and Fursuiting Knight! )

- Make the right choices in each room and you may find luck on your side. Make the wrong ones and consequence can be a b*tch.

- You will die. Unless you're cheating which more power to you. Otherwise the goddess will bless you with revival! ( But for only so long. )

So you still think you're ready for this? Hah! I love the enthusiasm! I'm sure you can handle it now. Probably. Get ready for madness!..no really I mean it.
You will probably lose your mind to the eternal dark abyss for which we are all destined to enter. I've seen it.

This....is actually real nice. I love your artwork, and am interested in seeing those skills put into making a game like this! so woohoo! \^o^/

I feel this should be put into a boxed set and sold on the internet and in select store fronts.