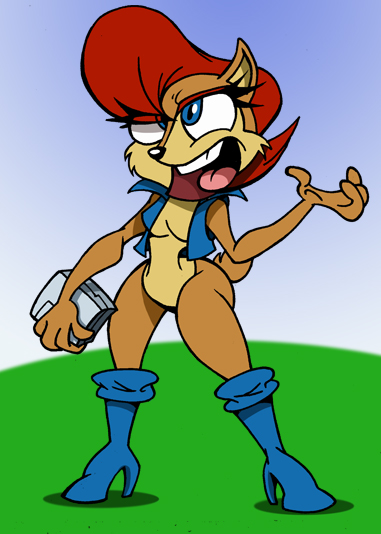 I think this is how the about half of people think of Sally.

I honestly can see that this is a good representation of how many people, including myself, think about Sally Acorn as a character in general. Yeah, Sally is still considered part of SEGA as licensing goes, but besides her acrobatic skills and her handheld computer (the latter of which Tails now has in recent Sonic games, like it or not), what DOES she contribute to be part of the series again? As far as we can push it, her smarts would clash with how Tails works in general if they were to up-play that. Another problem about her 'smarts' is IF they DO figure out where to place Sally's intelligence at, would people like that?

Sally was also created for the express purpose of being 'Sonic's girlfriend', something that Amy already fills as a character. Whether you like it or not, her character was written into SEGA!Sonic first between Naoto Oshima and Kazuyuki Hoshino, where they discussed how to develop and make Amy WORK in the franchise. Sally was made behind the backs of Sonic Team, which doesn't help Sally's case in the long run. Her leadership skills are also a huge no-no, as Sonic does NOT follow orders, nor DOES he need someone breathing down his neck to do the right thing -- Sonic knows right and wrong without Sally already. There's a reason why Eggman hasn't REALLY managed a full win, even in Sonic Forces where he was nearly there.

I think a load of people tend to ignore that as a Japanese company, Sonic Team is ALWAYS going to favour the stuff in the Japanese side of the fandom -- and the comment TherealRNO made about SEGA/Sonic Team 'always ignoring the West' doesn't take into factor things like Charmy the Bee (who also came from the same manga as Amy Rose, and was redesigned for Knuckles Chaotix), Espio, Vector, and Tails -- the Latter of whom was made in the West during Sonic 2's development when Yuji Naka took half of Sonic Team to America, Vector being remade from the concept art of the band for the music, and Espio was made specifically for Knuckles Chaotix, before being redesigned for Sonic Heroes an reintroducing them to the current generation.

Also, I don't get what TherealRNO's argument is about Serena and Misty -- unlike the Pokemon Anime, Sally was never added into the games beyond cameos, while Amy's been around since Sonic CD, so there's no reason for anyone to feel like it's a Misty versus Serena situation at all. There's also a LOAD of problems with how Sally and Sonic essentially FORCED people to only see them as the 'official couple' because...? There was literally no reason for the two to get together -- Sally is too restrictive, Sonic is too childish, their personalities would clash if both characters weren't stripped of everything that made them -- well, THEM.

Concerning the picture & the comment beneath it ("I think this is how half of [the] people think of Sally"), the exaggerated facial structure & over-the-top "prattling know-it-all" expression definitely highlights how some, mostly the younger generations usually unfamiliar with Sally not being badly written (often much to the detriment of her character personality) within the pages of the Sonic comics (for it definitely seemed as if Sally got the worst of the lot when it came to devising her character in the comics due to many writing staff member's suspected inherent bias against her).

No doubt the Freedom Fighters getting relegated to an American comic book continuity that gamer purists erroneously incorrectly cite as non-canon when the Sonic brand is a multi-verse (meaning that, either everything is canon or nothing is) can be traced, in large part, back to the SonAmy part of the broken fanbase, in spite of the canonically official fact that original programmer Yugi Naka himself said in a 2010 Facebook interview shortly after leaving SEGA that SonAmy will never happen outside of the Japanese version of Sonic X exclusively made by TMS Entertainment that in itself was no more official to the Sonic multi-verse than DiC animating the American Sonic cartoons that featured Sally Acorn, with Sonally intact.

The only nagging problem with this line of thinking was that the ongoing internal fighting between SEGA's top divisions (Be reminded that this whole matter began around the time that Amy's character was bought by SEGA from 1992 nonsensical manga publisher Shogakuken for her initial use as a damsel in distress for the 1993 release of Sonic CD to promote the SEGA CD attachment to the 16-bit SEGA Genesis/MegaDrive console to give it 32-bit processing power to try & compete with the emerging Sony Playstation opposite the Nintendo 64 that still utilized the aging cartridge system for its games but had 64-bit processing power comparatively, even though the makers of Sonic CD could and/or should have easily simply shoehorned already established Sally into Amy's otherwise relatively unknown occupied spot instead by opting to hold off Amy's debut for a later date, however to give them some leeway, maybe some felt as if they did not have the time to withhold Amy's inclusion just in the case the rights to license her were to expire, but of course, this belief was put forth by confused fans of both the DiC cartoon & Archie's corresponding tie-in comics as well as the Genesis-era video games well before we all realized that SEGA had actively purchased Amy outright from her creative publishers, a decision in itself which fans like myself digress over since adding Amy & ignoring Sally was clearly favoring one side of the fandom over the other, yet things would only get worse once an envious SEGA of Japan kept on bickering with equally stubborn SEGA of America on the prevailing issue of localization versus internalization until it decided to use dirty pool tactics to take out SEGA of America by utilizing its executive political stroke with video game designers that obviously fed off of Japan's recognizability as the video game mecca of the world to basically ignore all of the previous American input on Sonic's creation, forced the still persisting Freedom Fighters initial concept created by SEGA of America's localization to be relegated solely to the American-issued comic book endorsed by SEGA of America itself, the fact that Sonic as a character was tailor made purposely for the American market when first created in 1990 & the fact that characters like Sally herself were created by SEGA of America in 1991 back when it held the lion's share over what made Sonic a household name before SEGA of Japan forcibly wrest control away out of petty jealousy) not only forced it out of the console wars it was having with longtime competitor Nintendo (Unfortunately for SEGA, this was coming off the heels of the failures that were the SEGA Saturn & SEGA Dreamcast that were unable to hold a candle to Nintendo's N64 or GameCube consoles well before the Wii came out, let alone the emerging juggernauts that were the Sony Playstation 2 & newcomer Xbox from computer industry giant Microsoft & their steady stream of sequel consoles, to the point that SEGA had to effectively whore out their hedgehog mascot to their storied rival just to remain relevant in the 21st Century), but SEGA almost nearly went belly up & would have certainly taken "The Fastest Thing Alive" down with it had it not dropped out of the battle for console supremacy to instead become the Universal Studios of the video game company world, loaning its principal characters out to whomever wanted them for a sizable fee (ranging from questionable anime American dubber 4Kids [the only anime they ever did right was, ironically, the original Pokemon seasons, which incidentally itself seemingly capsized the long-standing Ash X Misty alias Satoshi X Kasumi aka Pokeshipping pairing, also otherwise referred to as AAML/TwerpShipping/OG Bike Shipping, that had long been in development - and was valiantly surprisingly supported by original dub voice actresses Veronica Taylor as Ash & Rachel Lillis as both Misty and Jessie of Team Rocket - for keeping young Mr. Ketchum perpetually 10 seemingly forever & giving him and his Pikachu, who will never evolve, a rotating door of female traveling companions & wannabe breeders to try & fail repeatedly at filling the void Misty & Brock had left; The comparison is uncanny, as many fans can see Amy Rose as the proverbial Serena to Sally's Misty when it comes to Sonic in Ash's role regarding the 2 enduring Sonic & Ash starter pairings, right down to both brands coming out with live stage shows spotlighting the original pairings - Sonally & Pokeshipping - back when they dominated both fandoms & having both tomboyish girls sing love songs to their guys: "Thank You For Being You" for the Princess of Mobius & "Misty's Song" for the Cerulean City Gym Leader, respectively] whose executives ruined the American port of Sonic X, the people behind the brief Sonic BOOM series & finally, to even ex rival Nintendo for use in the Sonic and Mario crossover games, not to mention Sonic being included as a competitor in Super Smash Bros. Brawl & its sequels).

TLDR version: Long rant aside, Sally is a SEGA creation. The end credits for the Saturday Morning Sonic the Hedgehog series (hence the fanon nickname "Sonic SatAM" to distinguish it from the titular character himself & the SEGA brand bearing his name that he represents) even read: "All Character Names & Licenses(c)SEGA of America, 1992".

Even though shes totally out of character it's interesting how looking at her face makes me want to slap the pretentiousness out of her.

now where is my gun -is handed sniper- man this bitch won't shut up... Im gunna do sonic a favor -takes shot- there we go peice and -amy starts bitching- ok thats it i need a bigger gun

BUT B4 I DO THT i wanna say nice job...and also wats in her hand? it looks like a laptop