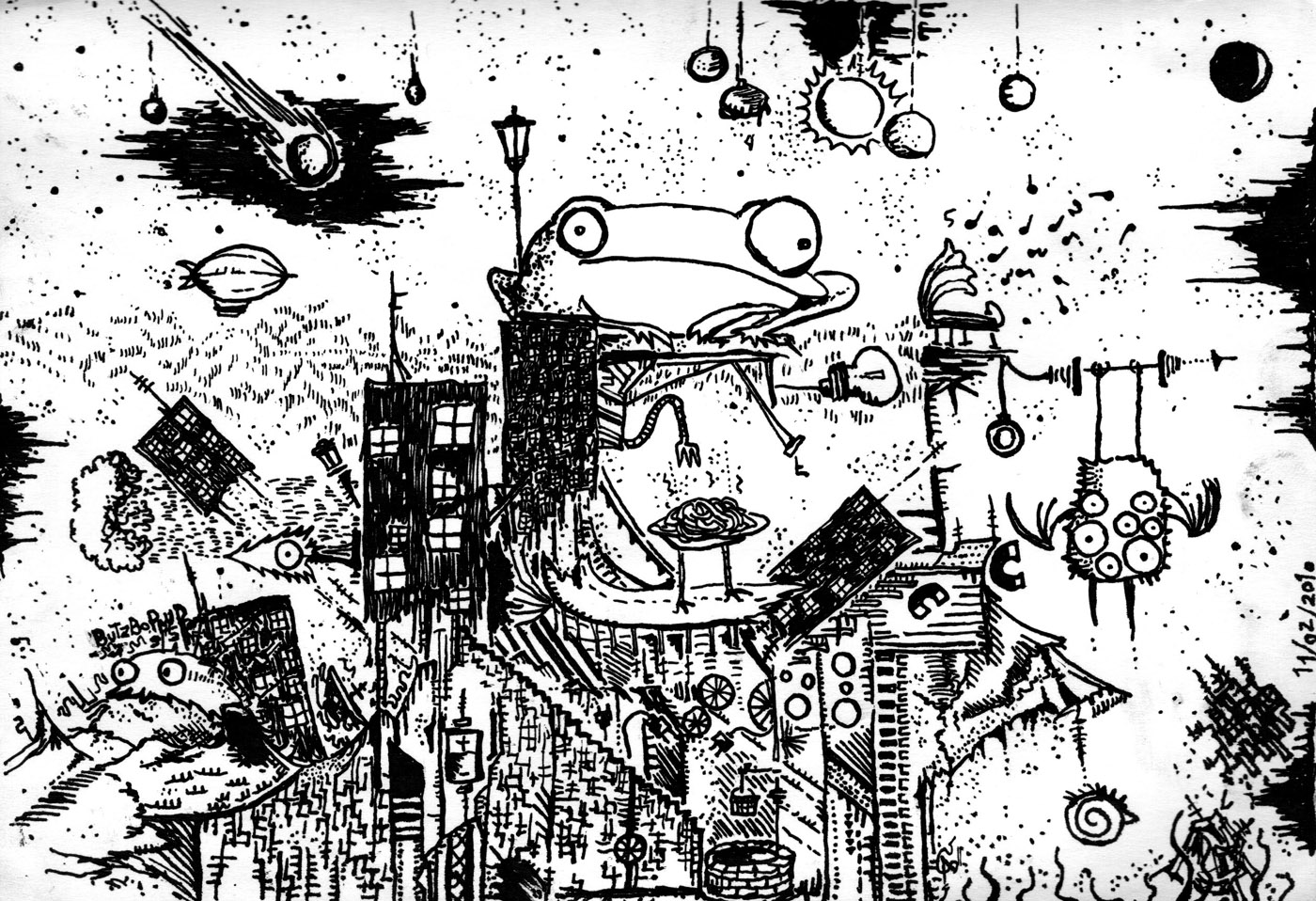 On its eclipse post, the frog observes the living 'things' and the floating dots ,it also smells the spaghetti, and listens to the records.
/
Made with 'chinese' ink.

Lots going on in this one.

I was kind of happy to see this piece front-paged it was a random choice but also well deserving so nice work there on that award type, hope you get more like that in the future, I start off this review and its pretty awsome that you can find stuff like this, theres lost to see and admire, and i do enjoy some detail and love that its abit on the artistic side but then again most art is. So this was neat i like these types and they do look god in the black and white style, some things were hard to see as it was in black and white though, it was a good piece though, as for improvment i dont know i kind of like it, theres lots of nice detail, im big on "COLOR" so maybe some stuff an be colored or all of it. And its always stuff like you have presented here that i really enjoy, there was lots to see in this one and there was some good showen effort on your part, now doesnt say that there cant be some more effort but thats for later, anyways decent art piece here.

~~THINGS TO IMPROVE ON~~
So anyways some slight improvments could be done, and it never hurts to try a few new additions, so i do hope the added suggestions will help on improving on this. But as i look at it it was ok some bundled up designs in there, and maybe some added color for later, but it was a pretty good piece.

I am so glad to be introduced to your art style, because this is some truly impressive artwork! The best part is that are simply so many things to look at in this single picture. The main image is the giant frog judging by the title. I suppose the lack of color was meant to emphasis that it was an eclipse. There were so many tiny objects in the background that you have to look closely. I can see some magnets and some objects that appear to have eyes, so it's hard to tell if they're objects.

I can make out a great staircase as well as a plate of spaghetti on top with legs. This is a great example of how a person can tell a story with a single image. It's as good as any great abstract cartoon sent here. Some of the planets appear to be falling down or maybe they're held up by wire. While completely incomprehensible, still flawless.

Whoah, i'm just finding this review which is rather 'old' (hope we get some sort of "notification" with the redesign, coming, extremely soon!).
Well, glad you liked it, I've been still aiming for this kind of 'abstract' work lately so there's definitively more to come!

Its so random 0.o I like your style bro....check some of my shit out too XD

I like this, the little guy with bat wings is my favorite.