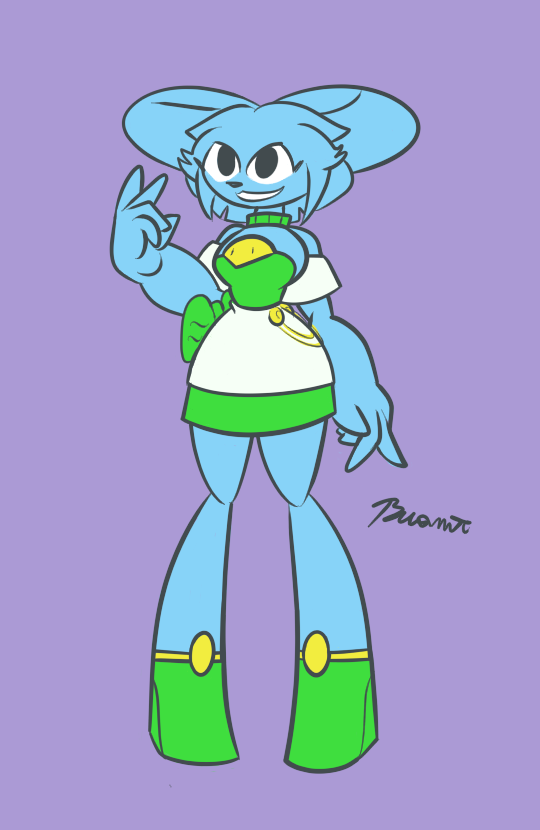 First of, she was named Velana Vice (Visseau) and was a generic hottie. My style of then was vastly different from what it is now (I mean it wasn't very good) so her sex appeal didn't really work here and I didn't really like how on the nose it was.

Being thirsty for the protagonist was really the only role she had, but with I was thinking, what if there was more complex relation between them. By result I had different vision for the character. She was given slimmer figure nd longer face, as well as puffy sleeves and decorated dress, I never implementedd the dress in a way that would sqtisfy me. I din't have idea about general fur tone. She also had her nationality changed from French to Greek and had her name changed to Vidi at some point.

Funnily enough I never uploaded anything where she was actually called Vidi. Here she was already Raon and from French to Greek, she eventually became Korean. I mean, I guess it fits character based around MMOs. I made her ears rounder too.

I really like the top center here. And the last one is really cute too.

It even inspired me to draw this. She looks top-heavy with my today's insight.

She had plenty of designs by then. But we're not done yet. The next iteration would introduce the bow she wears on the side of her dress nd a choker. Also, I finally got rid of pointy elven ears and just settled down with regular mouse ears.

The time I drew fullbody of a few OCs in prepartion for ArtFight. I see more issues the longer I look at it.

The idea to make her stand out was to give her really long legs, maybe too long compared to the rest of her body.

This pic was made before the I finished the latest drawing of her and was meant to be used for commission request. It has a few differences in anatomy compared to the newer one.