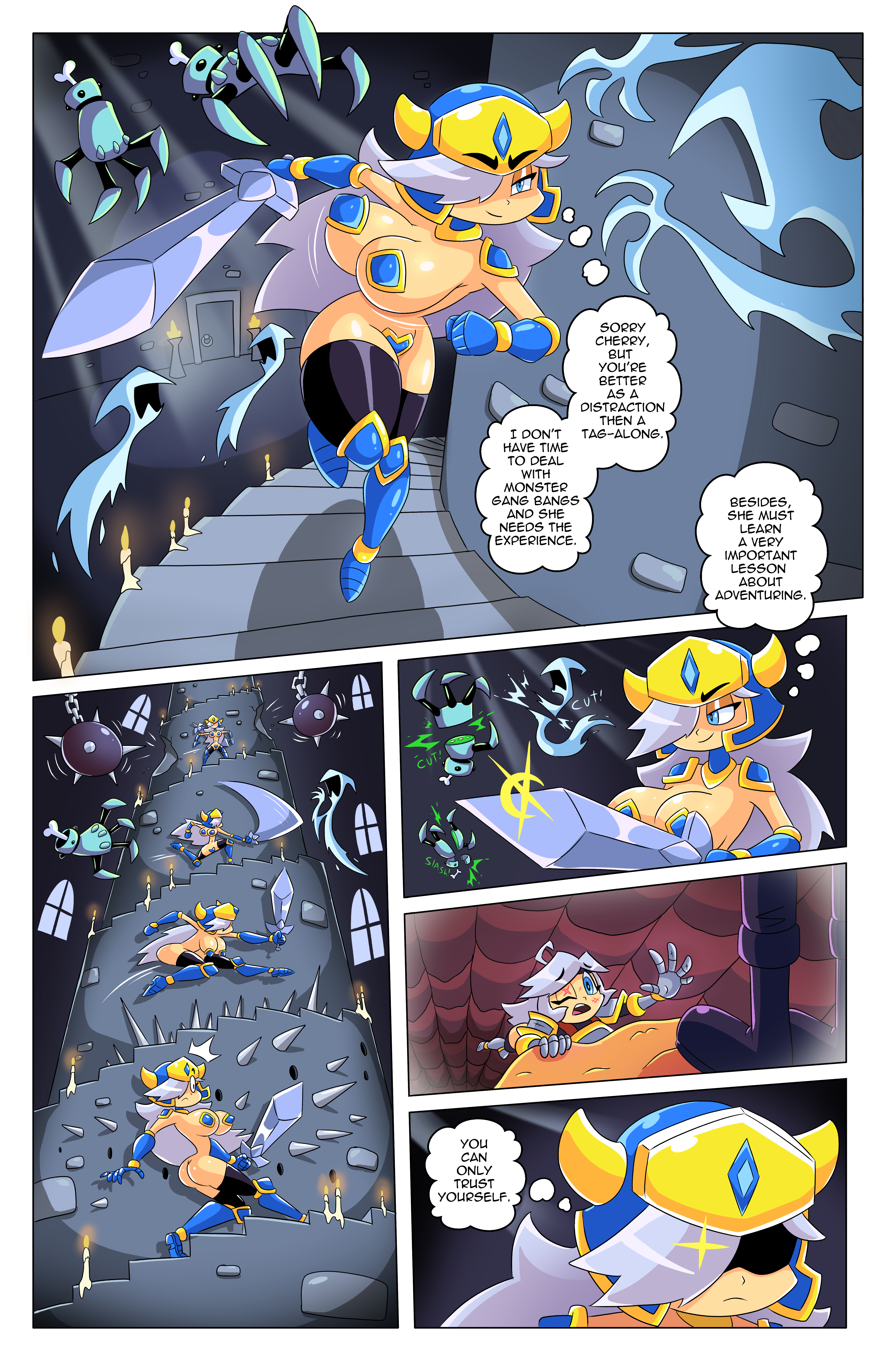 First off AMAZING COMIC!!! Keep up the fantastic work on a criminally underrated GEM!!!!! But I’m gonna try to make a prediction on what happens next. Let’s see how accurate I am. So while Cherry keeps getting drilled Mint keeps cruising through the tower as usual. Once Mint climbs to the top she sees the princess curled up on a bed whaling. Mint whispers she is here to rescue her and the princess stops whaling. She asks who is there and Mint replies that she is the Booby Knight coming to rescue her. Mint reveals herself and the princess walks towards her with shaken legs. Then she pauses. Mint asks her what’s wrong as the Princess’s eyes widen in petrification and her face turns pale. The princess alerts Mint there is someone behind her. Mint looks behind to see the enemy ready to lunge at her with a sharp weapon. Mint leaps out of the way and the enemy reveals himself. It’s the goblin guy(or as me and a friend of mine like to call him “Jerkin Jack”). Mint is surprised at what she is seeing. The newly constructed Jerkin Jack who just acted as an officer for the Slime King resembles little of when Mint last saw him. His one eye shows a look of both sinister intent and a lust for revenge from what happened last time. What was once just a puny little arm to jerk off his micro wiener is now a sharp axe ready to chop into anything within its striking range. One of his organic legs has been replaced with a wooden peg leg and has wide grin filled with razor sharp teeth ready to puncture. While Mint is surprised, like most enemies she encounters she is not fearful for phased in any way. Seeing him as more of a show off than an actually formidable opponent. This frustrates Jerkin Jack as he sees no fear or shock in Mint’s face. A face filled with determination. Mint tells the princess to get behind her and the epic duel between Mint and the reconstructed Jerkin Jack begins!!!!! I’ll leave it off there. Tell me what you think of my prediction and how accurate you think I’ll be

Great story so far, but damn Booby needs a round two with the Ettin for that.

Really makes me more curious as to why and how she became the way she is now.

I know betrayals can leave deep mental scars, but god-damn, Booby! At least make sure to come back for Cherry later.

Cool stuff, but Cherry's getting basically torn to smithereens, aren't you concerned?