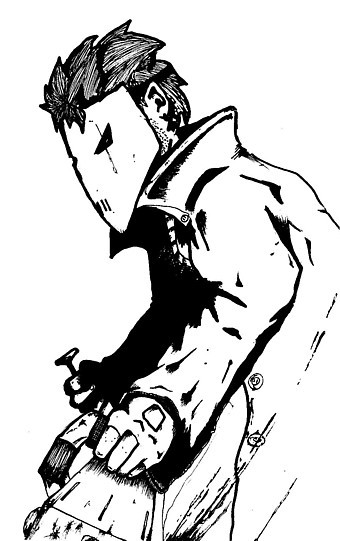 the original sketch is here...

its pretty good, its a mafia theme i'm doing. where there are unique characters, with story lines.
his name is Boggle. i will have more soon, do you like it? its like a psycho mobster or bandit or bounty hunter.

~~SUGGESTED IDEAS~~
Some added color like frames would be nice

What I liked about this was that everything seemed to be presented in a fairly cut manner. I will, however, say that I would like it if there were some flashier effects. It just seems a little dull entirely in black and white. This character looks a lot like Jason Voorhees and I bet that was the intention. You could also use a background of any kind. It might not be an art piece I would recommend, but it is far from terrible.

I suggest you maybe put in more details onto his lines and not just a lot of negative space. You have potential as the designs aren't bad, especially around the hair. I would imagine a mobster as being a character who would instead use a gun, but I guess not here. The best thing is probably the use of dark colors presented on his coat. I also like the finer details like the holes on his toolbox or whatever it is.

He kinda looks like jason. Yes Do more please!