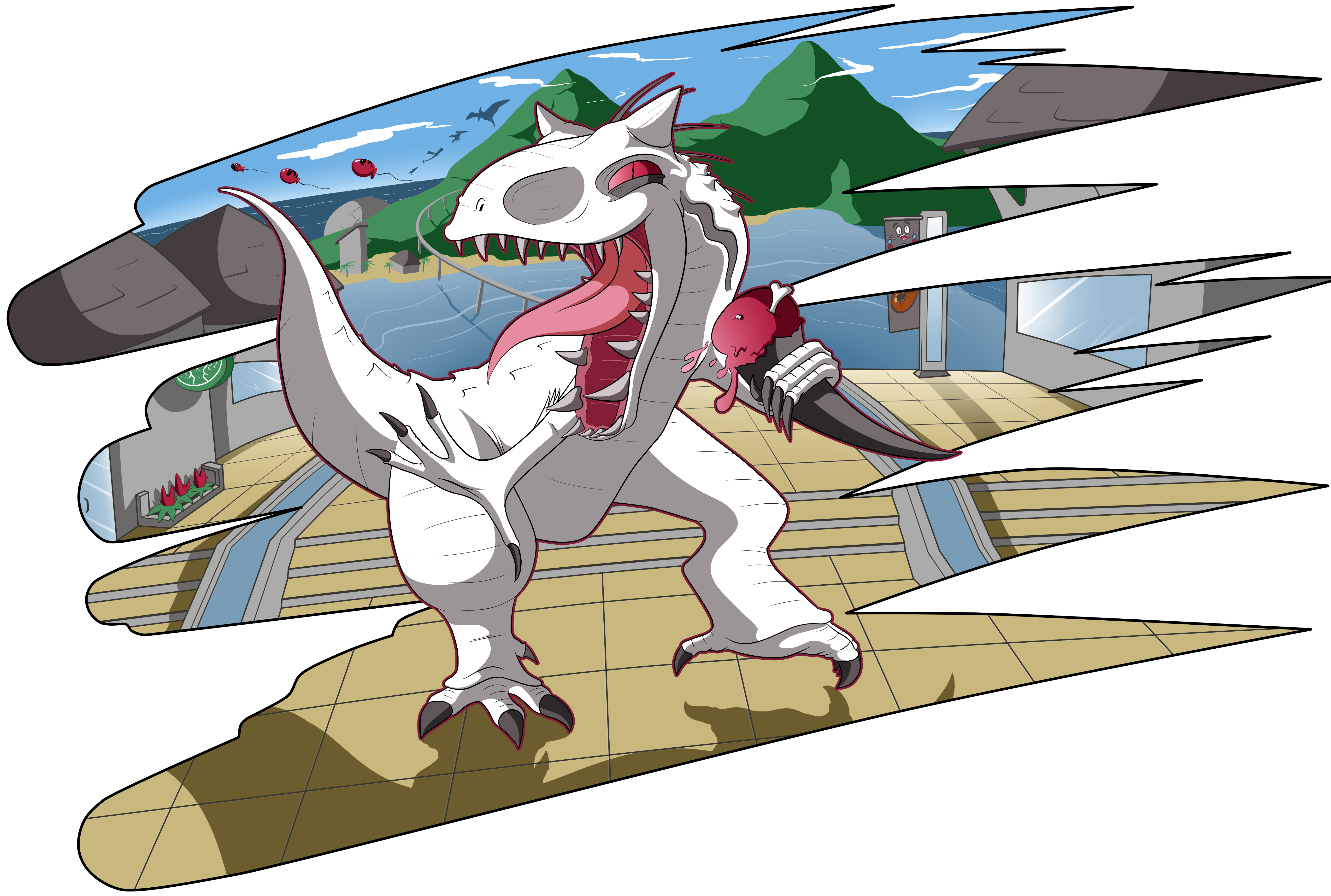 The people at Jurassic World really thought they could keep something like her locked up? Come on, that's not just stupid but it's also cruel. Look at all the yummy people and all the awesome things!!! You can't build the world's greatest theme park and not expect the super intelligent creature to get in on the fun too. It's party time! And yes, that ice cream cone is made from the horn of a Triceratops... I don't even want to KNOW what the 'ice cream' itself is made of *pukes*-

Anyone close to me by now has had to put up with constant ramblings about Jurassic World... For, god, way too long now. I try to maintain myself because when I get into the topic of Jurassic World it's a topic I don't let die. And it's usually a one-sided conversation. OTL
I
LOVE
JURASSIC PARK

And I really truly mean love it, it's my favorite film of all time, and the one I've watched more than any other, and that really is quite a statement cause I've watched like almost 2000 movies. I LOVE JURASSIC PARK WAAAY TOO MUUUCH as a child I'd literally play it almost nonstop, seriously like once it ends I'd either just rewind it and watch it again or throw in Lost World. To this day I can practically recite and re-enact the entire film, and you better believe I've been following the production of Jurassic World intently. Those of ya'll who follow me on Twitter can attest to that dsklfmdsamfk

But I've tried to refrain myself from drawing anything JP related again until the movie was actually out, I didn't plan this, this was just a doodle of her that I felt was worth coloring XD AH I'm really really starting to like the I-Rex!! Which is a good thing because when we first got leaked images of her from the Lego set I was... Not a fan, I thought she seemed she was gonna be pretty boring and uninspired, and once we got full out video footage of her from trailers and stills I still felt that way. In just a few days time though she's seriously grown on me, and I'm starting to totally love her.

HER HANDS SERIOUSLY WEIRD ME OUT, and I'm so happy they went with white for her. Not only is it neat to have the first white dinosaur in the franchise but it works so well making her have albinism since she is the embodiment of a lab monstrocity, I mean all the dinos in JP are lab made abominations but she's a whole nother level. And I really really like that she is a way to give representation to all sorts of different theropods the series would have never gotten to otherwise, I mean, really, do you think we'd ever have gotten a Giganotosaurus in the films? And it's so neat to FINALLY get the Carnotaurs in one of these movies! She may not get the camo invisibility from them but regardless, it's just the same. And the very idea of her, both what she is, and why they even created her just is so neat in so many levels.

I can't wait to watch her kill stuff PFPTHAKSMDLA seriously this movie's gonna be fun, I haven't been this excited for a film since...........

good design. Jurassic Park was my favorite movie as a child and now.

I CAN'T TAKE THE WAIT FOR JURASSIC WORLD