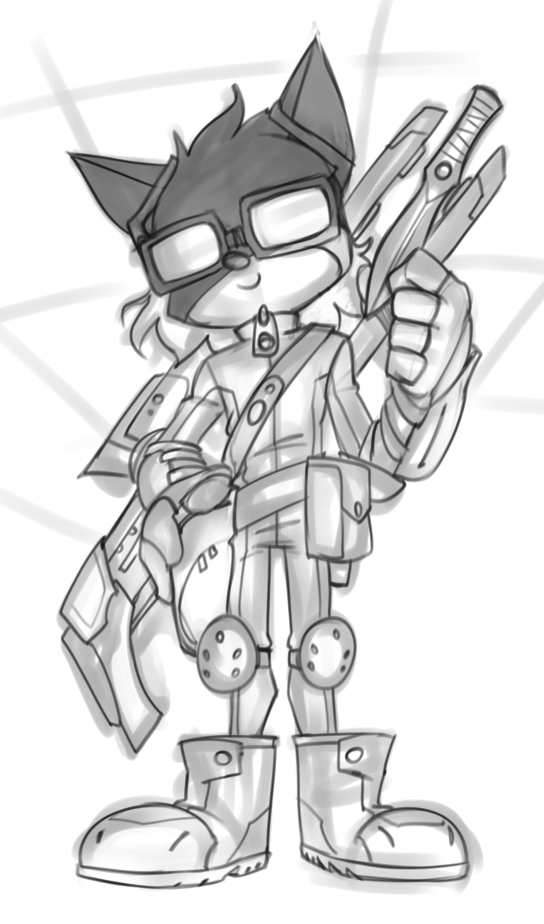 The scourge of Robots everywhere. With great strength, indomitable will, unmatched hatred, perpetual smile, a hidden gaze and complete silence, Gadget only has one thing on his mind. Kill all Robots. He's the second heavy hitter of Bunny's team but he cares very little for the Resistance or their goals. All he cares about? Kill all Robots. The resistance members themselves give him a wide berth. None of them fully trust him. Most fear him. When he's in the room, everyone scrambles to get out of his way. Their fear is misplaced though because his ruthlessness, unrivalled bloodlust and violent anger fuel only one thought in his mind. Kill all Robots. Or if someone convinces him that someone is a robot. These instances are quite... unfortunate. The more sentient Robots, like the mining drone Ore-Bot and the sentient encyclopedia Q-Bot (The Q stands for question), discovered true fear when they first encountered this seemingly lanky red wolf. He tore and ripped them apart, be it with weapons or his bear hands and teeth. He didn't stop. They couldn't make him stop. Not until he'd killed all robots.... well, at least in the base he was assaulting at least. The robots of the Regime all know him. They don't know or even care what his name is. To them he goes by a different name. A name that serves as a reminder of what he will do to them if he ever comes across them. To them he is the Codebreaker.

Not everything about him is Kill all Robots. The Daughter of Bunny's team medic Vanilla by the name of Cree has taken a shine to the mute wolf of mass destruction rather instantly. For unknown reasons, he took a liking to her as well. Maybe she reminds him of someone. Whatever the case. His care and protectiveness for her has made him her honorary uncle in Cree's eyes. Vanilla herself doesn't know what to think of the wolf though. On the one hand she doesn't want her only child associating with a person as dangerous and unhinged as Gadget. On the other, Cree seems to be the only one who can calm the untamed beast. As if medical services weren't stressful enough.