For the month of January we have disabled ads on all E-M content. We need 192 people to reach our January goal of 3,000 active supporters. If we hit that, we'll continue with a new goal in February! 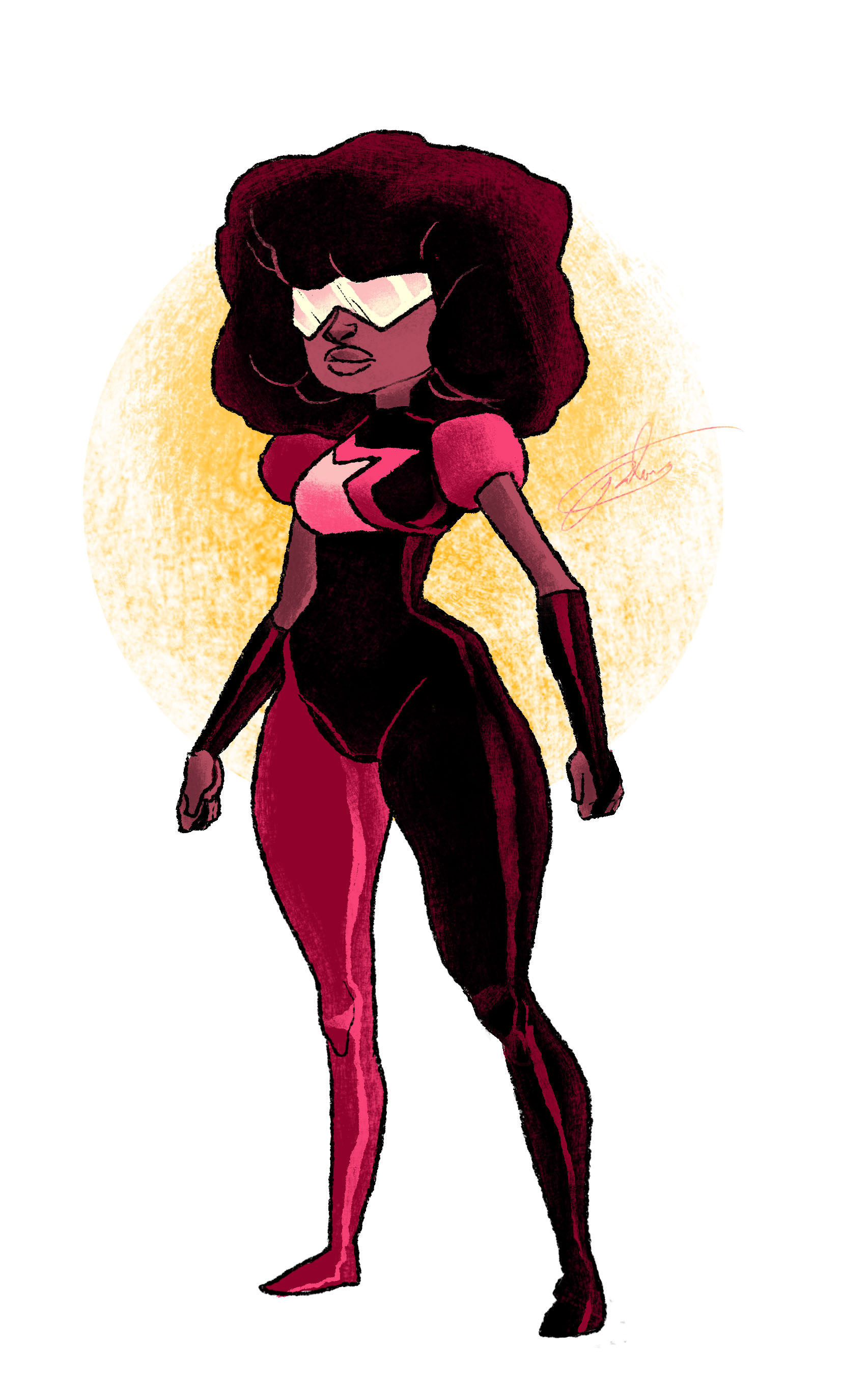 Hey another Afro Chick I guess. Wanted to draw her and experiment with textured brushes. I thought the original straight haired thin body Garnet design was awesome. But I think I see why they changed it, and the new designs pretty great as well. Watch Steven Universe!

After throughly analyzing "Steven Universe". It definitely has a feminine charm compared to most cartoon series and characters.

It's no Sailor Moon or Inuyasha, but a cute coming of age story about the imperfections we all have, even if those characters are etherial gem girls.

So far my favorite character is Pearl, in character design and personality. She looks delicate but she's basically a Samurai. And combining sword fighting with ballerina dancing is a top notch idea.
Plus she kinda looks like a bird with that nose and hair style.
She is also very motherly towards Steven.

Amethyst is a wild child. Contrary to what Amethysts usually represents, which i being calm and serene, Amethyst displays a carefree personality. Which could be 'her' way of being serene, even at the expense of being kinda messy.

Garnet is so stoic. She hardly gets to speak but often says very profound and intellectual things. I personally liked the older illustrations better but this new style is still very cool. Plus she's Black, got big hips and a big afro.

My favorite episode so far is the conversation Steven has with his dad, we learn a bit more about the back story of Steven's mother.

In most cultures, the Rose Quartz gem is a symbol of 'love'. Hence why Steven so far has never shown any signs of extreme anger and is unusually optimistic.

There is a speculation that the reason why Steven's gem glowed briefly when eating CookieCat IceCream is because Rose ate that same IceCream while she was preggers.

Draw the rest of them!

I can't wait to see how Rebecca Sugar plans to flesh out this world, where magical beings are just the norm in the world. No secret identity, just another day in Beach City.

I think the Music is the best part of the show so far.

Also, if I can somehow find some music I was thinking of having a collaboration of submissions of fans of the show.

Draw your own Crystal Gem!

There will be a list of hundreds of gems and you simply illustrate a character based on how the gem looks or it's representation.

Yeah, it does. It kind of shocked me at first, like I felt weird when the action music started playing and.. it was... a really girly ballad of sorts. lol Then, I was like, oh yeah.

Garnets my favorite, but I suppose I'm more like Pearl lol. She's my second fav from the show.

Can't wait to learn more about there back stories.

She's actually my favorite gem. The others are weak and useless.

Aw com'on the others are cool too. Pearl is the brains, and Amethyst seems like she could be the strongest if she had any focus at all. thanks for the rating!