Won't You Be My Neighbor 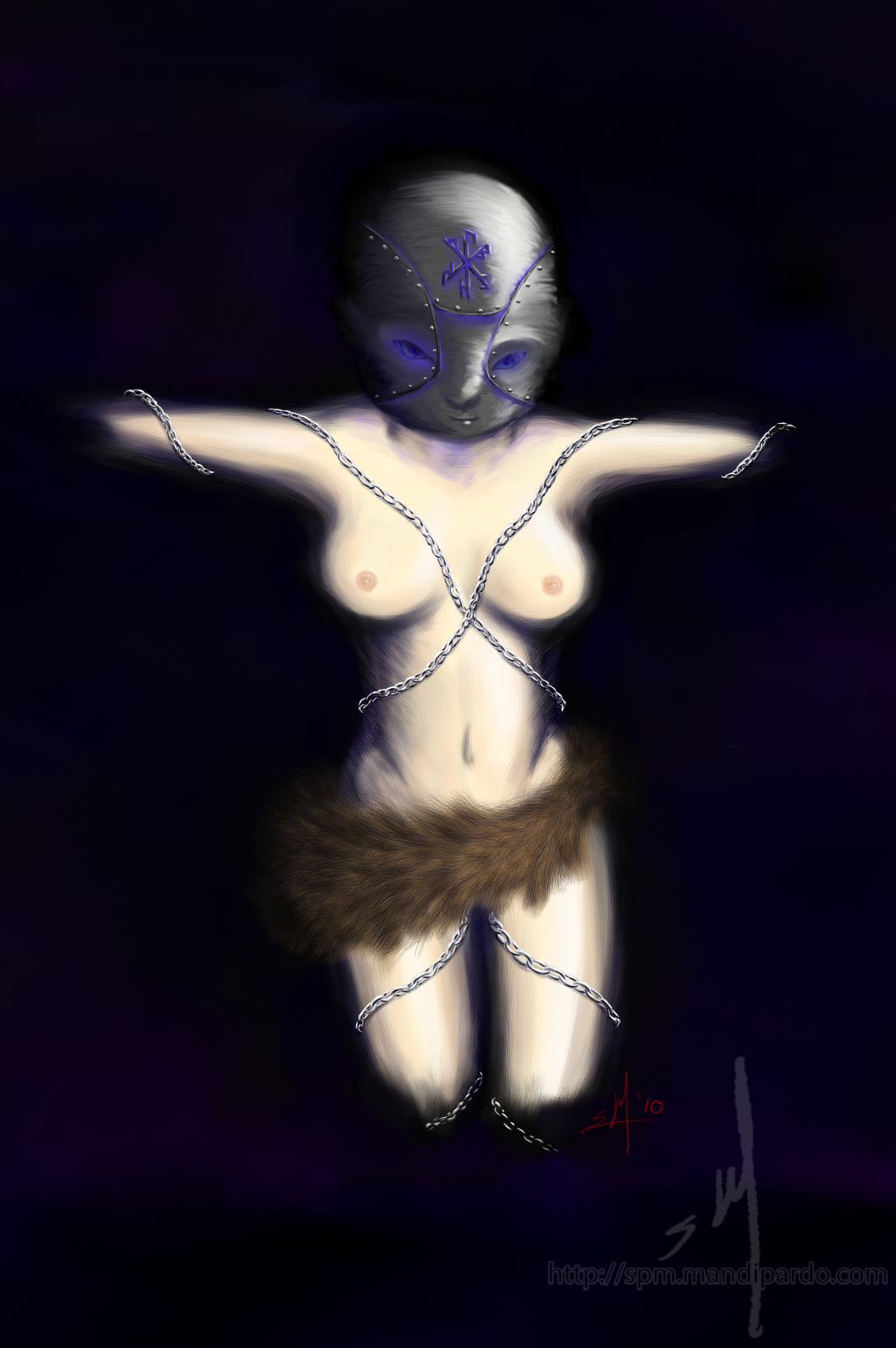 After much work and many attempts at completely redoing this piece from scratch, it is finally finished. I had wanted to accurately capture one of my forgotten gods, Seraphina. She who was cast into the abyss, left in solidarity, with chains and metal restraints forged onto her body. While some of her original concept did not come through on this piece, I still felt that some of the spirit of her character was fully represented.

I'm not sure what's going on here, but I'm going to try and get to the bottom of it all. Right, there is a woman in only a fur belt, metal mask and chains criss crossing her flesh. I only say female, due to the figure / breasts. The face does look quite infantile and doesn't give any real clues as to a gender from my point of view.

The eyes do need some work, as they are not level - move the right one up a little and slightly to the right, just to get it mostly even and perhaps redo the mouth - it currently reminds me of Patrick Moore, which is more than a little disturbing.

The background is good for setting the mood and with that in place, just a little more attention to detail is required to bring it all together.

Yeesh. Would be one way of putting it, anyway. This is quite a disturbing piece to first look at; right from first glance it really hits hard with its stark and almost unforgiving depiction of this character.

The detail in this is pretty incredible, especially in full size; you've got the very dark and moody background, the several shades of skin tone, the shading of the fur...the detail you put in is relatively astounding, and certainly pays off in creating the atmosphere you have done.

I'm sort of in two minds about the mask. It certainly adds to the seeming distress of the picture as there doesn't seem to be any escape from it, and the eyes visible through it do appear a little angry, yet impassive. But that aside, I think seeing the captive's face and/or the emotions running through it may prove just as effective, maybe even more so, in creating a sense of despair. Failing that, maybe making the chains a little more substantial and binding, to link to the heavy restriction that is the mask a little better. THough that's essentially just nitpicking, though, because the picture itself is one of the best I've seen on NG. Great work, overall.

Good picture, but the mask should go

The details you put into this work can only be clearly visible when this picture is viewed in full size. The "thumbnail view" makes the character kind of look like a little doll, only in full size it is visible that it is a real peron tied to... well, something.

Just as XwaynecoltX I think the mask should go. It would give the picture a better atmosphere. Or if you want to keep the mask maybe it should reflect the emotions of the person who wears it, ie not a smiling mouth but a mouth that screams.

I think this would emphazise the dark and quite painfuly atmosphere of the picture.

It reminds me of The Gray Fox, from Oblivion. Her mask looks exactly like his.
Still, could use some more work.

-I've never used Corel Painter even though it came as a standard program on my computer in trial form. It looks like it can create a lot of fine details with a lot of time and patience though.

-I particularly liked what you did for coverage of the god thing that you are depicting. The fluffy sash tail thing that you used has a lot of high details and shading that make it look like real fur. I thought the chains were a little small and could of been made larger to have a greater effect of being highly bound in chains. That and the mask seems a bit odd on the body. The dark background is a nice touch which could even of had some weather effects like lightning or some rain.