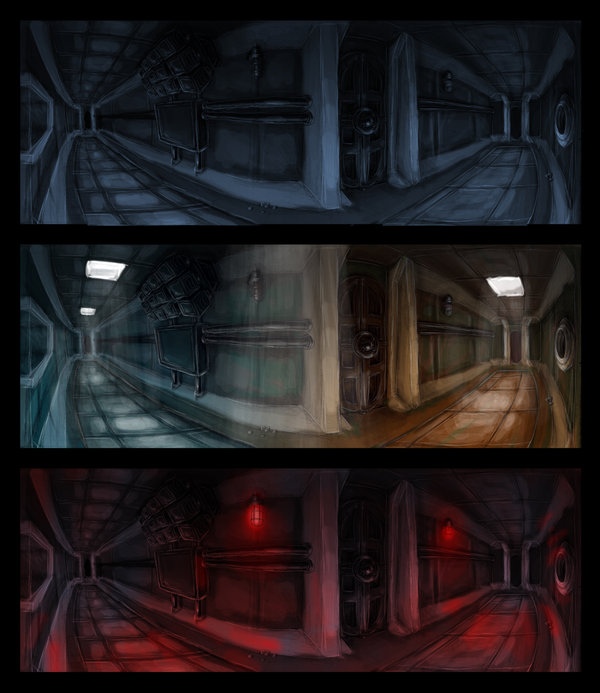 Background concepts for Shadow Legacy 3 lighting stages. This image was created for reference on style of the human ship Trinity

Nice job, it's a really amazing design, but it seems a bit flat. The perspective definitely looks legit enough design-wise, but color-wise and detail-wise it could use some work. For coloring, try making the colors less vibrant as they go further into the background and more vibrant as they come into the foreground. Also, the doors in the background at the end of the hallways seem a bit off. They are much brighter than the molding that leads up to them, which causes them to pop out, when they should really be pushed back. Try making them a bit darker than the molding that leads up to them.

And as far as details go, the corner of the wall in the foreground and the pipes that connect to it might look better if they were less blurry. Try giving the wall a more firm and definite edge, less fuzziness. And for the pipes, try making the dark wall behind them more different from them. Right now it's hard to tell the difference between the pipes and the wall behind them, and that difference should be very clear in the foreground of the picture. Also, the point where the pipes on the left side of the picture connect to the tv seems to be more detailed than the point where they connect to the wall, which gives a false impression of depth. Details should be very clear in the foreground and less clear in the background unless the focal point is somewhere in the midground or background.

Good job on the design though, it looks really awesome.