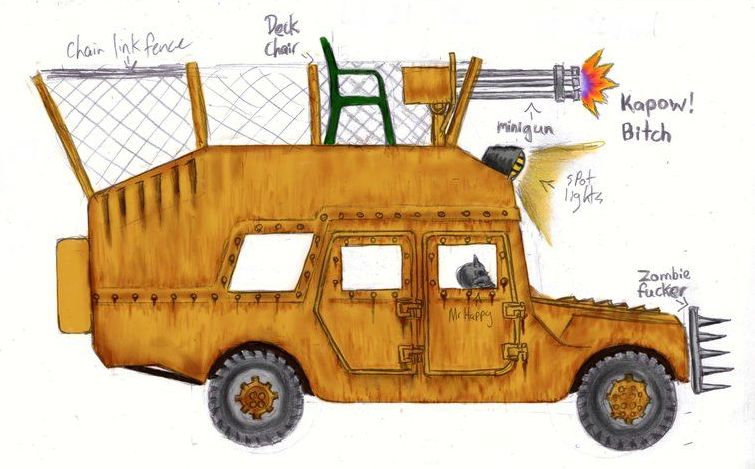 A modified HMMWV (humvee) for the zombie apocalypse.
arkanrais.deviantart.com

Epic win. I want a zombie fucker for MY truck. >:(

I'd ride in that!

Okay, so the actual drawing is a little bland, there's not a lot there. But the humor totally makes up for it, the zombie fucker is amazing and the little Kapow! Bitch thing is amazing. Very cool idea, it's original and I like it.

Here Is My "No Bullshit" Assessment

This is not based on the art, as it is a 9 or 10 star worthy piece. This is based on pure design and effectiveness of the vehicle in the alleged situation.

1) The "Zombie Fucker" is a nice touch, but in the overall design, a terrible idea. In the event you're trying to flee an infested area, the LAST thing you want is more of them sticking to the front of your vehicle as your current design will -slow- your overall progress of travel if you have that much more "baggage". It will also -not- kill the zombie unless you happen to get a lucky gouge through one's brain.

2) The windows are too large. Any ghoul could easily reach inside or pull themselves inside the vehicle. Anything more than a few inches is bad news.

3) The uppder deck is a great idea. Being beyond the reach of the average ghoul will greatly increase your survival. Having said that, you would be -much- better off having a solid plating instead of a chain link fence. The open links would make excellent grip-holds for ghouls that have undoubtedly amassed around your vehicle should it stop. The solid plates emliminate the climbing grip by having a smooth surface and would make the overall safety of the deck increase tenfold as well. Rounded or padded edges are preferred.

4) While it has always been a symbol of hope for humanity, the mini-gun can be a formidable enemy to carry with you. It's inaccuracies are the main concern as the chances of scoring a critical head shot are fairly small, which would mean burning more ammunition that could be better served in some other weapon with a higher accuracy and less bullet spread; IE, a rifle.

5) The noise. A vehicle of this magnitude would attract every ghoul within a ten mile radius. Unless that is the objective of your mission, I would strongly oppose using this vehicle in any sort of travel.

6) Another factor would be the large consumption of fuel. Humvee's usually average about 8-10 mpg. Unless you know where fuel is, or you're close to your base of operations, this will be your biggest concern. I would rather not be in this vehicle when the gas goes "E" and you've just stopped moving in infested territory...

If I had my "Zombie Survival Guide" (by Max Brooks) nearby, I could site pages and paragraphs of specific examples.

Can I get one?

I love the Zombie fucker on the front. It also works when you're driving on the sidewalk.