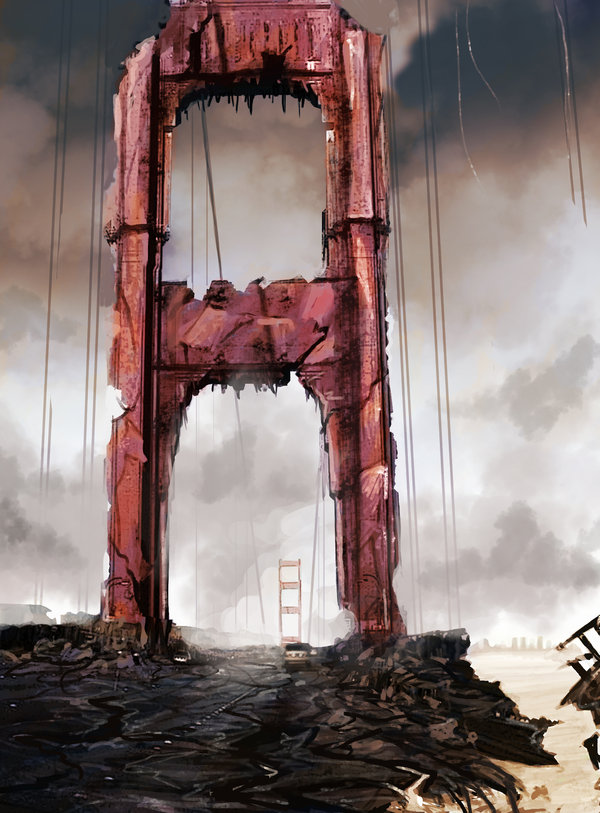 Another Concept made at my work for a SmartPhone Game.

~~REVIEW~~
Now here is something that caught my eye, as it did i added it as my faves, now this reminds me of a chaotic world of the future with still some remains of the great bridges and monuments still standing and i think you captured that as it is, really awsome texture, im not so sure if i like the view of it like looking upwards i would have liked to see the view shot from maybe up on a hill, so that you could possibly see more of the bridge in pieces maybe in the oacean and or just laying around, it would really look more better presented i thought, well just an idea anyways, but what you do have here is very impressive and great detail and effort you put into it, Im also thinking it might look even better with maybe a man standing there looking up at it or even maybe a lady and child, it would give that effect of something truly devistating has happened, again just another idea that might bring it out much better i thought, anyways really good stuff here.

~~THINGS TO IMPROVE ON~~
some people in center view, maybe show off more of the destruction of it all aswell

Love the realistic scarring on the bridge. It's awesome. And just the concept ruins is worth a ten =)

reminds me of the bridge scene in mission impossible 3 =D

Well done for just 2 hours or work, it reminds me to I robot movie. Really like how the cables blen with the sky. Great work 10/10