For the month of March we have disabled ads on all E-M content. We need 72 people to reach our goal of 3,000 active supporters. If we hit that, we'll continue with a new goal in April! 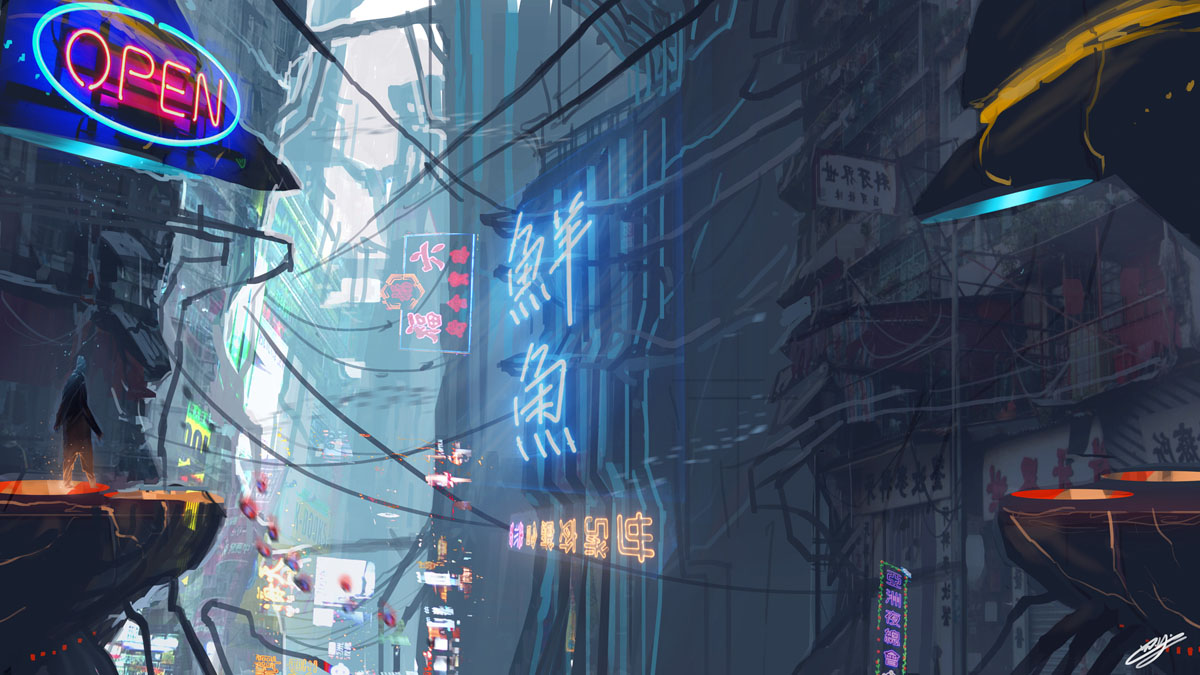 First real entry to the Art Portal. Been on NG for a while now, mostly as a music producer, but I always felt my art wasn't good enough for NG. Now that I've become more comfortable using a tablet in Photoshop, I can let the creativity flow without hesitation.
Thanks, and I hope you guys dig it =]

Very nice work, you have some sci-fi feel to your stuff and even a retro feel, the neon and lighted towns bring off that vibe, and thats pretty good kind of reminds me of blade runner, I wouldnt mind more light up neon just to give off more of that lighting effect, anyways nice work here.

Not good enough for NG, my ass.

haha, I guess I was humble

Not good enough for Newgrounds? This is amazing...

Hahaha, I have been proven wrong by so many people by now. I really should edit that out.

I wish i had a drawing pad :(.
Anyway this reminds me of blade runner.
It looks awesome great job.

you don't need a drawing pad/tablet. just get a pencil and paper. there are plenty of other mediums to mess about with aside digital ;)

kinda like this pic, but why are some of the chinese letters in the wrong order? i cant really read it but i know at least if you put em right or not xD. the blue and lila letters are correct. the red and orange/yellow letters are in the wrong direction... the way you put em there you have to turn your head to the right (orange one) or the left (red one) to be able to read em xD.

to the blue letters: if it's japanese (wich uses the same chinese letters, just with different meanings,... it says sengyo wich means fresh fish...lol but i can't really see a fish shop or so there xD. maybe it would be a good idea to check out what all that stuff means before using it ^^
also how is that guy to the left supposed to come back home? calling a fishtaxi? or just falling down? or will he just swim back home?

oh and i found a little mistake: i'm not sure if you wrote these blue chinese letters or just used a pic or so and did some digital photoshop thingy, but the letter for fish here isn't perfectly correct:
the left line to the bottom has to face to the right not to the left. also the 2nd fish kanji (chinese letter) has two horizontal lines in the middle (within the box ^^) there is only supposed to be one line like in ya first one
here check it out: http://www5.big.or.jp/~otake/hey/kanji/gifmoji/f6/sakana.gif

other than that i kinda like it... reminds me of bioshock...in an asian way

Hahaha! Man, you are literally reading into this too much. I picked characters and letters that I thought fit the concept and the aesthetics i was going for.
I swapped, flipped, and painted over characters specifically to hide any meaning to them.
So, as much as I appreciate the in depth review and your breakdown of my piece...you're critiquing it on aspects that wouldn't change the piece as a concept.