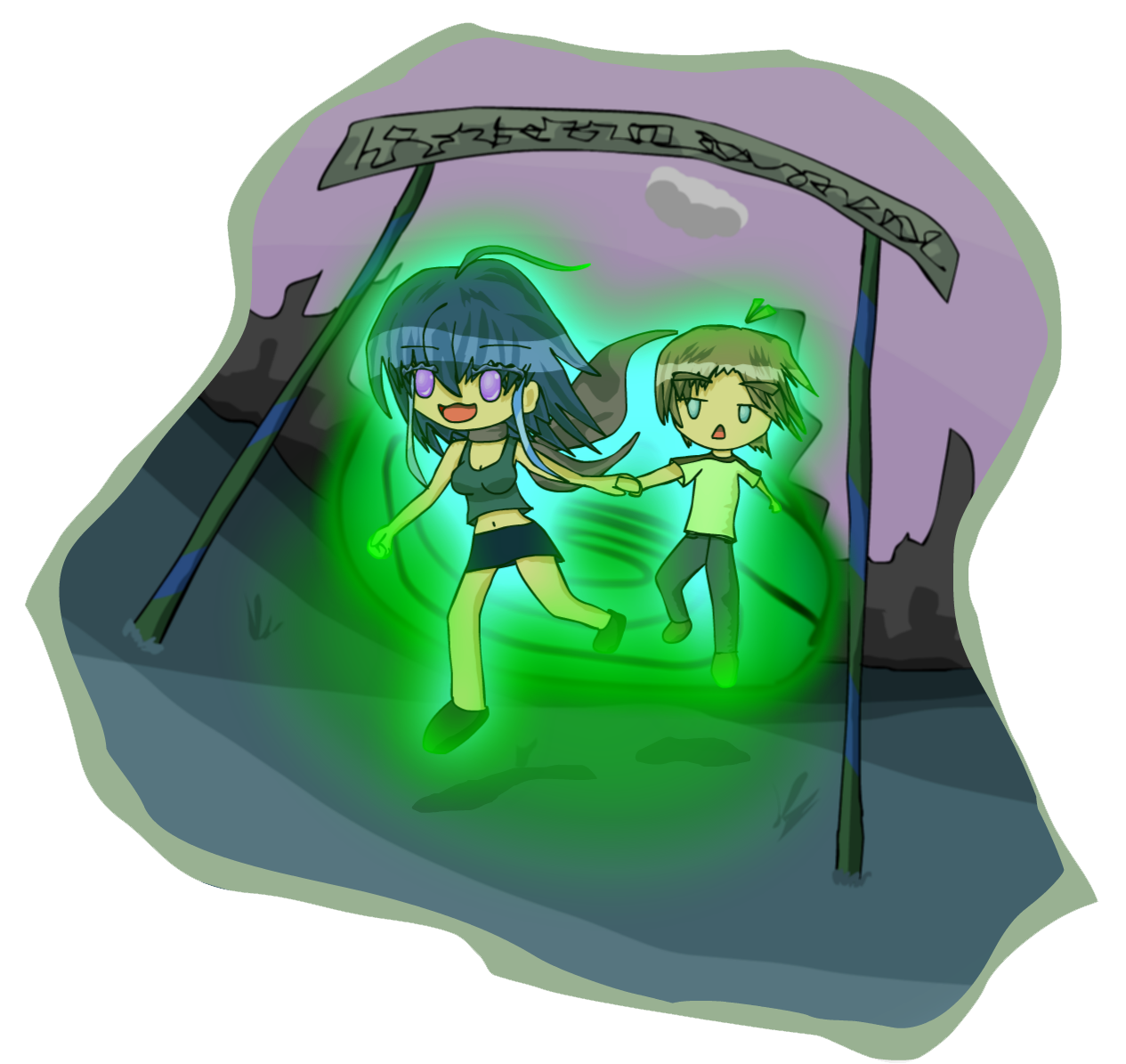 I've been developing a new drawing style that I hope to animate with. It almost resembles anime, but not quite. It's something completely original and it is going to be used to help me feel more comfortable with drawing in general.

Here come some negative comments- I hope you don't mind.
I hate to tell you this, but, like binkyboy said, this style isn't "completely original". That's fine, though, and so long as you're trying, your style will become more of your own, and will develop. There isn't any such thing as an "original" style; I've been trying for years to make my style distinct, and it still gets compared to Tim Burton, for instance. The style of this piece in particular reminds me a little bit of the anime Lucky * Star.
I have some little critiques to drop on it. The first thing that popped out to me was the strange look of the feet, especially those of the girl, which have a potato-like shape. The hands are somewhat odd in appearance as well. The girl's breasts are lumpy looking and a little uneven, and a valuable lesson you should learn should you be drawing well-endowed women is that breasts will never look good unless they're smooth, round, and symmetric (that applies to all sizes, but the larger the breasts, the more they're noticeable). The legs just have a strange thickness to them and look blocky. For the characters in general, I'd suggest you study and practice with anatomy. Even in cartoon styles, anatomy is a very valuable concept to understand, and you could benefit greatly from working with it.
The next thing that pops out about the piece is the strange appearance of the portal thingy behind the characters. It looks like you took some doodled lines and filtered raped them, and that causes it to look out-of-sync and ill-fitted with the rest of the style. An effect should be consistent with the rest of the piece, and here I think it would have been a good idea had you drawn an equally cartoony-looking wormhole behind the characters. Photoshop effects generally do not look good unless in the hands of an expert.
While the main subjects of the piece are quite flawed, I have to admit that I like what's going on around them. The perspective is a little wonky, sure, but I like colors and aesthetic of the background- some people don't pull off simplistic backgrounds well (myself included), but I think you've done a decent job with that here.
I hope some of this stuff helps. Keep practicing and you'll improve, and maybe you'll develop a more personalized and original style along the way. The best way to go about that is to stop trying to draw a specific way and draw in the manner that feels the most natural to you. Good luck and keep working at it!

I think this is funny. You are telling me this can't possibly be a "completely original" style, correct me on anatomy issues even though most American cartoons are far from being anatomically correct, tell me that the focus of the picture (the portal) is "out-of-sync and ill-fitted" with the rest of this not-completely-original style, then tell me I should draw something that feels most natural to me.

First off, I consider chibi to be part of anime. So in other words it also resembles chibis but not quite.

Of course there is no "completely original" style these days. Every person's style is somehow influenced by others'. However, my style is a combination of chibi and cartoon. That includes backgrounds, concepts, anatomy, and what ever else anyone may criticize. This style was MEANT for me to draw what feels natural to me. Of course it's going to look a little wonky, I'm working on that. Anything else that looks strange like the portal is because this was the cartoony part of the style. That's the "completely" part. Cartoons themselves are supposed to be very flexible in these regards, but I understand that they still have some limits.
Also, my style was influenced a bit by Scott Pilgrim. I recently saw an illustration made by the creator depicting Ramona having round boobs similar to those of the girl in my picture (plus she looked a bit chibi-like as well).

And well, this was all done in Flash. I took careful consideration with the glowy effects, the bg colours, and perspective.

But thanks for your thoughts, I'll try to work harder on making my drawings look better than ever. This started out as a doodle so you can imagine what I can accomplish if I work harder!