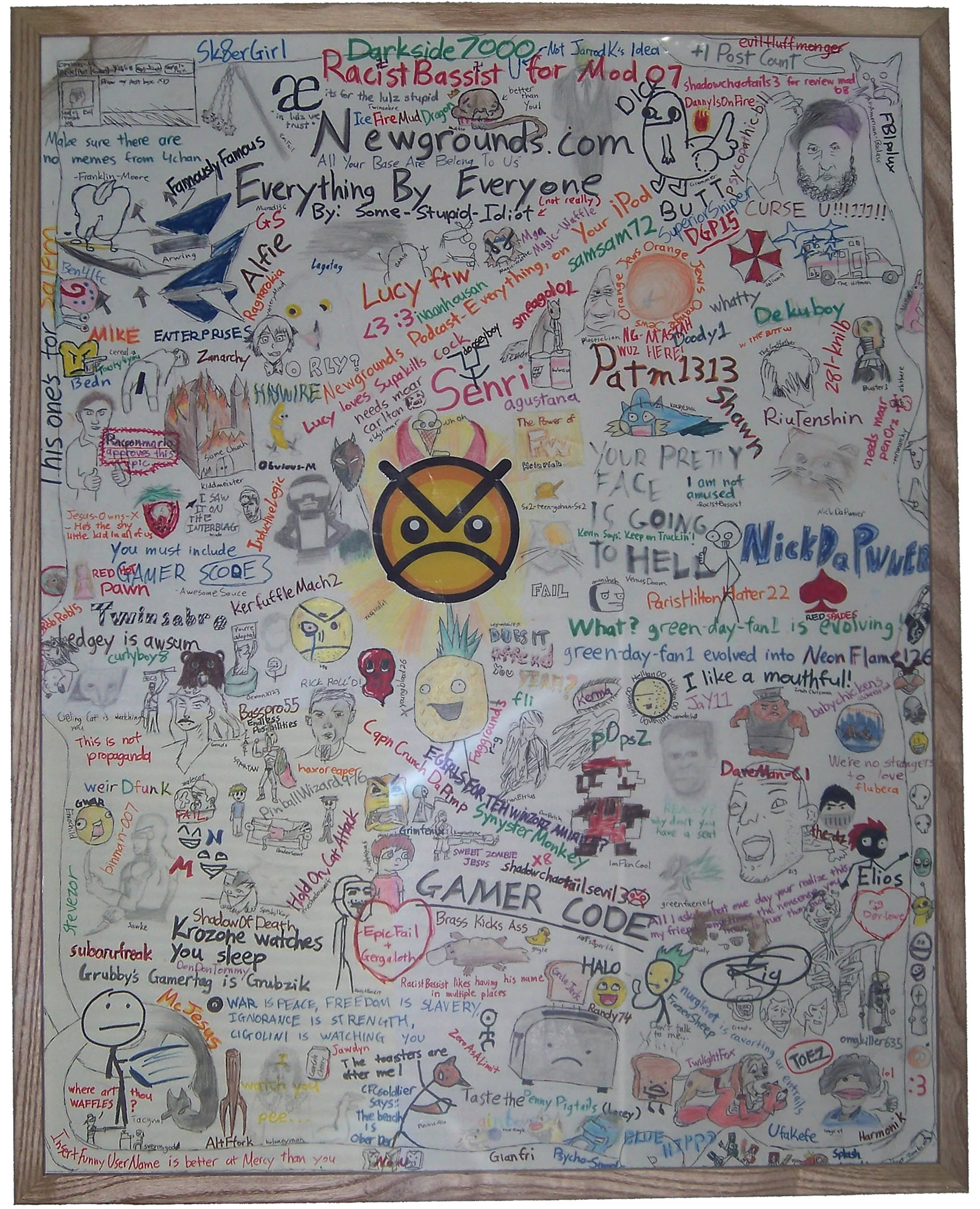 So a little more than a year ago I made a thread on the BBS asking users to contribute a line of text or a picture that I would draw on this good-sized piece of poster paper I had. Some users posted, it was picking up pace and the poster was filling up.

Anyway, the project went on for a couple of months, I even asked a good amount of users to contribute to the poster to the point where the word "contribute" became my most frequently typed word.

I had some great contributors and I was pretty happy that the users that answered back with a contribution.

So it was nearing some end and this thing had to be stopped. I had an idea that I wanted to get this copied cheaply and send it to other Newgrounds users. Well, my friend, BrianEtrius (Newgrounds user) also shared the same idea. This poster was a pretty nice sum on the surface of the BBS (probably only General.)

He searched, I searched. The cost was way too high and I doubt anyone was willing to dish out a $30 for a copy of this poster. So we stopped. However, BrianEtrius did some more efforts in promoting the poster. He'd PM an admin to see how this would work with the copies if this was sold in the store and probably many other things.

Well, it got old, everything was stagnant and the poster faded away, along with contributions. Months past, the poster was rolled up and stored. Well, then I got the poster framed, the basic meaning that this project was closed and done. It would reflect loosely on what the end of 2007 to the midst of 2008 of Newgrounds had.

And so I thought that it would be appropriate as well as BrianEtrius who encouraged me to photograph it and post it here since it was an art project too.

The project is finished and so here it is, not sure if anybody remembered contributing to the poster though, if you look at it in the magnified full version, the text might be legible enough to spot your user name.

Anyway, about the poster. I took two different shots of the poster because the flash made a glare on the final shot which obscured some images, so I cut the clear shot from the second image to the first image where the glare was which is why you may notice that one part of the poster is at a slightly different color than the rest of the white.

Concluding, here is a list of users to be credited, I can't put down everyone who contributed, just the ones that did some other efforts to help.

BrianEtrius for helping in getting this copied/ extra promotion/ basically being the co-person in charge
RascistBassist for...putting your name everywhere and being basically the first contribution.
MikeEnterprises for the multiple contributions.
FBIpolux for the longcat border suggestion.
NG-mastah for some good contribution help.
Twinsabre for some help on the contributions and putting in promoting posts.
PlasticLion...and PennyPigtails for also contributional help
Rig for the three great contributions on it.

That was a swell idea of having a big yearbook style picture of all the well known Newgrounds users signing it,i don't remember if i participated or not but regardless it looks great and i love the angry face in the middle.