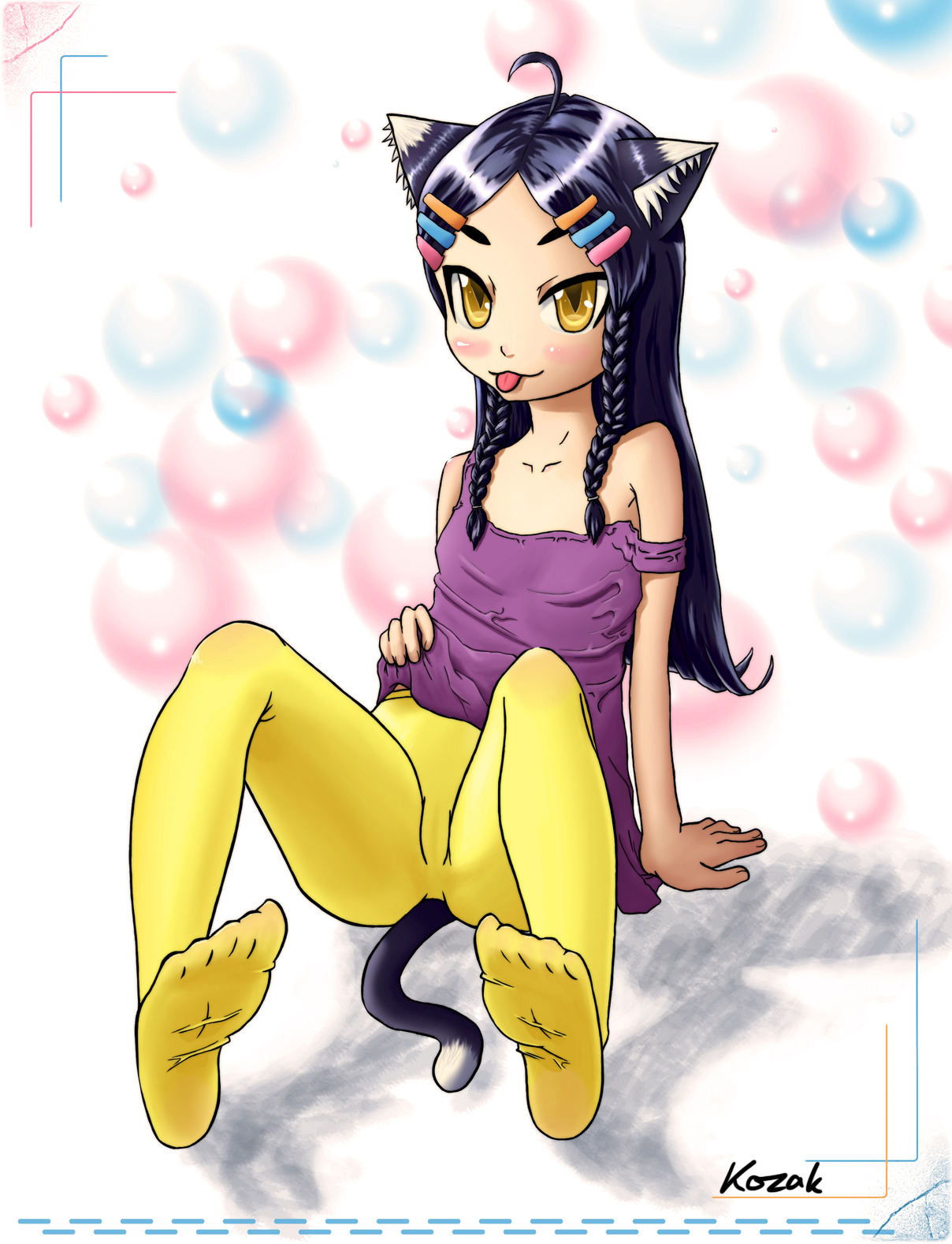 NYAAAA!! =^w^=
This is Nyariko when she was younger. Isn't she cute?
It was a fucking long way for this pic to be finalized. A week ago or so, I opened a pic I liked on gelbooru and scribbled down the pose, changed the face, the hair, the position of the right hand and the clothes. About two days after this I scanned it and did the outlines free-hand. After that I colored and colored until only the hair was left. And with that I fought two or three days!! T^T I couldn't figure out how to do dark hair. After looking around on the net and changing the base color of it 20 times or so I found a tutorial for braids. So I changed them because they were rather crappy and Ranma-style (you know, just some spherical "things"...). Then last night I used my old way of coloring hair, just splottin' some color on and smudge it around. I'm not really satisfied with it, but it works. ^^'
As for the rating, she isn't nude, there is nothing showing but it's a bit suggestive, (strike this:so I gave it a mild nudity. I think you'll agree.) but it get's no rating.
I hope you like it! Leave some comments and use it as Desktop BG if you want! ;)

For starters I like how strange and bubbly feeling the background is so you did a nice piece of work there anyways. What kind of motivation did you have when you did this anyways? The cat ears are quite adorable here and make you kind of want to have cat ears of your own as well which is cool I guess.

The stockings which are yellow and seem to go up past her chest seems to be cool and pretty as well. Could have maybe added a bit of stripes to it I guess. Then the shirt looks pretty nice as well. The hair clips and her facial expression are somewhat coy yet silly too.

I have to say that overall this one is pretty cute anyways. Keep it up. ^^

Thank you very much! ^^
Erm... motivation... I just copied a pic from gelbooru. I think since I like feet and tights and stuff I just wanted to draw something I really like. ^^''
The tights go up to her waist. They end around where she pulls up her dress. There's a tiny spot of skin, if you look closer. ^^

Don't pay attention what the commenter below me says. You can draw whatever you damn well want to draw.
I personally am not much a fan of the anime art style, but I can respect it when it's well done (and this is pretty well done.) Anyways, onto an actual review.

This is a cute little drawing, though the pose of the girl makes me feel kind of mixed towards that thought. Your anatomy is pretty good; I'm especially fond of how you did her feet, considering that feet can be a bit of a bitch to draw. You've got an excellent sense of detail going here, from the folds in the clothing to the hair to the general shading. Your lighting is pretty well done, but it also doesn't make a whole lot of sense. The body and the clothing keep a consistent light source (from the left), but her hair and eyes have highlights that indicate a light source from the right as well, which kind of conflicts. On the end of her hair, there's even a highlight that would indicate a light source on her lower back. While that issue isn't exactly a glaring problem, consistency is something you may want to pay more attention to in the future.
I'd also like to point out that certain elements of the background don't look so good. The shadow that's underneath her is somewhat strange looking- pay attention to real life shadows cast by people and objects and you'll probably notice that they're usually one solid shade of grey, with no textures. The bubbles that occupy the background are also kind of corny looking, though that's more a matter of personal preference than anything.
Overall, I'd say it's a very solid drawing. Good coloring, good lineart, mostly good lighting and shading. I hope the constructive criticisms I gave can help in some way.

Thank you very much! I really didn't expect a detailed critique here. ^^
You're absolutely right about the feet, they can be a bitch! But like I pointed out in my comment, the whole pose isn't really self-drawn. I just have a basic understanding of anatomy but if it comes to poses where you have to think about 3-dimensional stuff I really suck. I read somewhere that copying can be the key for some people to understand poses and angles, so I'll bear with myself for a bit longer copying stuff.
For the background and shadow: yes both is lame. I first thought about doing no shadow at all, but the pic would have been so empty, so I tested some brushes and doodled a really crappy shadow. xD In the future I'll stick with non-textured dark greys and I'll look up pictures with shadows on it or take some photos outside.
So, thanks again!

great art but one question?

why is this M?

Thank you!
Errrm, yeah, like I wrote in the comment, the pose is a bit suggestive, so for security raisins and not to be blamed for fucking up children minds I gave it M.
If you look at a comment on "heavenly music" (the girl with headphones), I was blamed for not giving it an M, but I didn't think it was in any way suggestive.
edit: but you're right. what the heck! No M for this one! xD