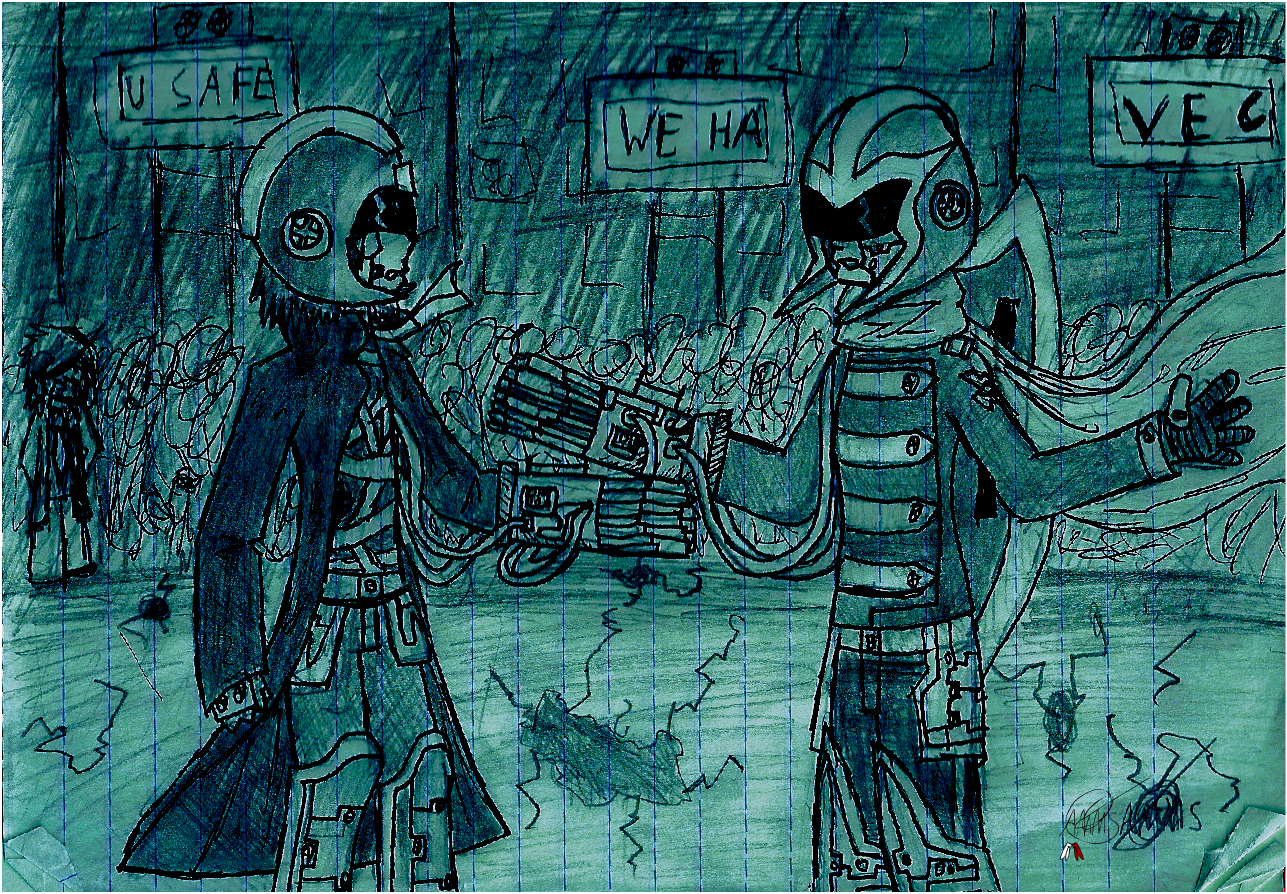 Dr Light: You're trying to understand. I told you your brother had been killed.
Yet, here he stands in the very shadow of the man you came here to destroy.
You came here to avenge his death. You came here to save mankind. You see now, you cannot do both.

[Megamans eyes raised to meet his brothers.
Protoman met his stare, held it for only a second and turned his attention to the bloodthirsty crowd.]

Protoman: Tell me now. Is there a man among you here?
Is there no one who will stand up and try to fight?
Tell me Man, is there not one in all your ranks? Is there not one who values courage over life?

[Protoman turns his attention back to his brother]

They looked to me once. Now they turn to you. Do you understand now?
Do you see that the truth is they don't want to change this?
They don't want a hero. They just want a martyr, a statue to raise

I've given every thing I can. There are no heroes left in man.

No matter which one of us lives, the ground we're standing on will crack and blow away.
You will fight. And when you fight, you'll fight alone. And in the end you'll see there was no other way

I've been here before. I've stood where you stand.
They called me their hero, The Hero of Man. But why should we save them
when they stand for nothing? If they deserve life, LET THEM STAND FOR THEMSELVES.

Weve given everything we can. There are no heroes left in man.
They'll watch you die to save their lives. They will not stand here by your side.

[Suddenly Protoman stops. His eyes fall on his father.
His face changes almost imperceptibly. Nothing changes but his eyes.
Then, as quickly as hed stopped,
Protoman leaps off of the shattered robots and lands in the midst of the remaining army.
Throwing his bare hand into the side of one robot,
Protoman sends him flying into the ranks.
Three, four robots fall under Protomans powerful blow.
He destroys his own legions as he makes his way to the front of the line. He stands alone in front of Megaman.]

Protoman: We've given everything we can. There are no heroes left in man.
So let them watch as we decide the very fate of all mankind.

[The air is thick with smoke. Protoman makes no move, but stands,
still at some distance, at the ready.
Megaman, still fighting to fully grasp the truth of the situation, raises from his knees.
His weapon raised hesitantly, Megaman locks eyes with his brother but breaks free seconds later.
His eyes dart over the crowd searching for Light. His fathers eyes are on the ground.
Dr. Light can watch no more. The crowd watches with fiery intensity.
Megamans eyes fix once again on Protoman. His weapon drops to his side.]

---
I was practicing poses and shading and backgrounds in pencil, and so I took the obsession with the Protomen I have atm and used it in this xD;;

The colour tone was changed in Flash, and I added a clearer signature... other than that, 'tis all the pencil stuff =3