It was suggested that I tell the story of how I came to meet "Weird Al" Yankovic, so I'll try and do so without too much overt boasting.

In 2003, I made a music video to accompany the polka medley from Al's latest CD, Poodle Hat. The song is called Angry White Boy Polka, and like Al's previous polka medleys, it features portions of popular songs by equally popular bands set to a fast beat and a cheerful key. The imposition of such a happy tone over the generally lugubrious lyrics is quite hilarious. You can see the Flash animation I made here: http://www.newgrounds.com/portal/view/132035

A few months after submitting the animation to the Newgrounds Flash Portal, I received an email from Al's drummer, Jon "Bermuda" Schwartz, who told me that he, Al, and the rest of the band happened to see the video and were impressed. This was quite an honor in itself, but the surprises didn't stop there.

After that, I received an email from Jay Levey, Al's manager, who told me that Al wanted to try and get the video put on Fuse. Mr. Levey acted as an agent of sorts in dealing with Zomba Records, who would buy the rights to my video and transfer it to film so it could be shown on television. This was all very exciting, but more than anything, I really wanted to talk to Al himself and hear his personal opinion on the video.

I asked this of Mr. Schwartz, and he told me that while getting some one-on-one time with Al might be difficult for privacy reasons, he did say that the band's tour would be taking them to the Puyallup Fair in Washington in September of 2004. Mr. Schwartz offered me backstage passes so I could talk with them all face to face.

Nearly a year after I'd finished the video, I bought a plane ticket to Seattle and headed for the fair. The concert was fully packed, and the crowd was crazy loud. Mr. Schwartz had gotten me a fine seat - not too close, not too far, and right in the center - and the concert was just terrific. 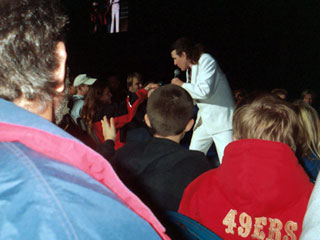 Al played music from all points in his career, from Couch Potato to Amish Paradise to Eat It. The backstage meet-and-greet, however, was what I was really looking forward to. 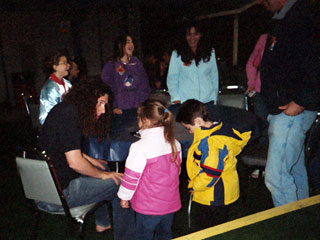 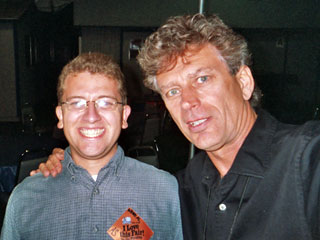 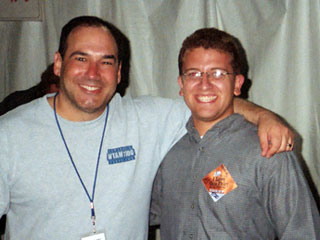 Jon Schwartz is a class act through and through. 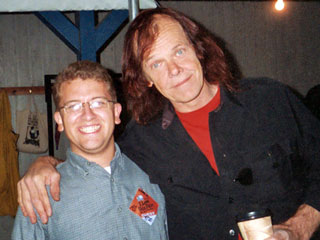 Steve Jay is another cool customer.

Finally, I sat down with Al himself. Like the rest of the fellows, he was friendly, courteous, complimentary, and just plain classy. He treated me as though he'd known me for years. He explained how he'd initially seen my animation while visiting Matt Groening's house for a Simpsons Guest Party. Mr. Groening's son is a Newgrounds fan, and he had shown my cartoon to Al when he came over. All of this was rather overwhelming for me, but I overcame my starstruck situation so I could make the rather bold suggestion of perhaps forming some kind of working relationship with Al and his band.

Al surprised me by saying that he'd already considered it. Since the TV deal with Fuse hadn't gone through, Al came up with the idea to have me animate future videos for his next album. I would send my cartoons to the recording company, where they would be added to the data section of the CDs - so folks who put the discs in their computers would able to view them. He also said the animation process could be either entirely mine, or I could share creative ideas with him and the band.

I didn't know what to say. It was quite an honor. I told him I loved the idea.

Al and I sealed the deal with some pictures: 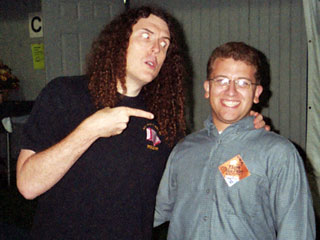 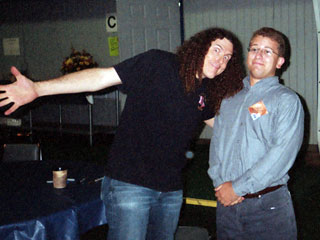 And so the adventure closed, and I returned to California with the biggest ego boost I'd ever had. I will not say that Al and I are now best buddies or anything, so I'm afraid I can't go and get autographs for anybody. Al's new album is still a ways off, too, so I can't go giving any hints on what his new songs are going to be, because I don't know anything about them!

Even so, this whole deal has really changed my perceptions about the internet. It seems as though anything can happen through it. To be frank, I didn't think my cartoon was really all that good. It's sloppy and unclean. I never expected to receive any adulation over it, let alone from anyone famous. I only made it because I wanted to try and make a music video of my own. Take this to heart, folks! Don't let perfectionism or self-doubt hold you back from expressing yourself. You never know who might be watching, and you never know where these people might take you.

I'm not sure what will happen with Al's next album. I haven't heard from him, Mr. Levey, or anyone in the band for a long time. Even if nothing comes of it, I can't say I haven't been fortunate. In the meantime, I'm working on a different cartoon, an action-adventure mini-series called Evil Land, and it's taking a very long time. I can't say it's the funniest, most original, or even the most interesting tale, but then, I felt similarly about my last project. I'll submit it to Newgrounds, where Heaven-knows-who might see it. Maybe Shigesato Itoi?