The Behemoth and Newgrounds at the 2006 Penny Arcade ExpoSeattle, Wa.

I always need to start with some back-story, for the un-initiated: In 2002, Dan Paladin and I made a Flash game called Alien Hominid. In 2003, we teamed up with John Baez and Brandon LaCava to form the Behemoth and independently develop a console version. It was released in November of 2004 to lots of praise and even won some awards! Ever since then, I have juggled my duties as the CEO of Newgrounds and programmer / co-founder of the Behemoth. We are currently developing an XBOX360 Live Arcade version of Alien Hominid, as well as a completely new game, Castle Crashers. We showcased both at Comic-Con 2006 in July, and just a month later, it was time to share our updates with the crowd at the Penny Arcade Expo.

My flight from Philadelphia arrived in Seattle at 8pm on Thursday night, August 24th. John (Behemoth co-founder) and Emil (Behemoth tester, webmaster and uber-helper) weren't far behind on their flight from San Diego. Our first stop was to pick up the rental car and head to IKEA, where we were picking up some last-minute shelving to display and store our t-shirts! 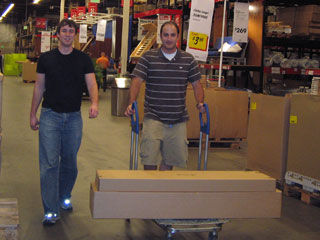 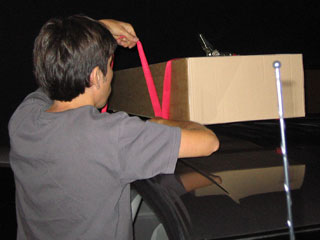 The SUV was full, so boxes went on the roof.

The convention center was no longer open for booth setup, so after a quick tour of the facilities we checked in to our hotel and went to bed. We were up bright and early at 6am Friday morning, to power up with breakfast and get to work on the booth before our meetings! John and Emil had brought monitors, test kits and the booth backdrop with them on the plane. Our merchandise had been shipped to the convention center, so it was waiting for us when we arrived. 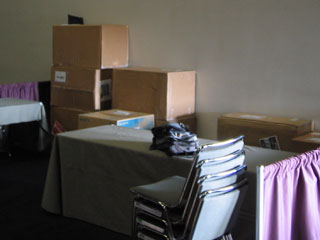 I got to work on that IKEA shelving. 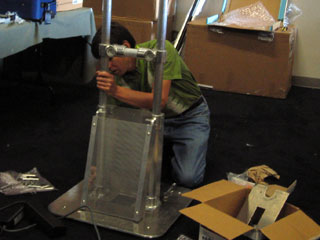 John & Emil put together the pod and back wall.

The gaming pod goes live and is ready for action.

Microsoft and Nintendo both have their central HQs in the Seattle area, so we had scheduled meetings with both companies to stop by and say hi. I was excited to check out the Nintendo museum and shop at the Nintendo store, where I bought some gifts for my Nintendo-obsessed friend, Rob!

We almost forgot to take these off before the NOA meeting.

Our meetings complete, we returned to the convention center to finish setting up our booth. Afterwards, we meandered to the Capitol Hill district to visit Jake and Don from Gastronaut Studios! I got to play their upcoming XBOX Live Arcade game, Small Arms, a hot four player melee game featuring ranged weapons and 360 degree aim! I'll definitely be buying a copy when it comes out.

Hungry for some grub, we visited the Elysian Brewing Company for dinner and a few beers. We were met there by Billie, who wears the Alien Hominid costume at Comic-Con and helps us hype the booth. His flight arrived around 11pm, sans costume. The Hominid head is so big, it would have cost a fortune to ship. Instead, Billie came out to help us run contests and give-aways at the booth. He's got a better personality for it. 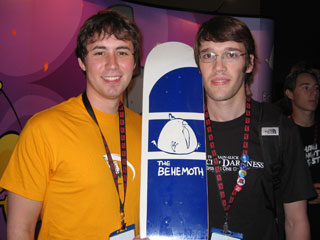 Stocking t-shirts on the shelves. 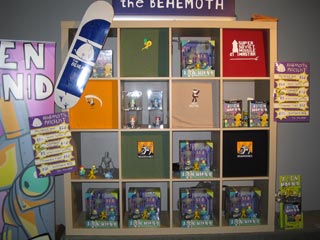 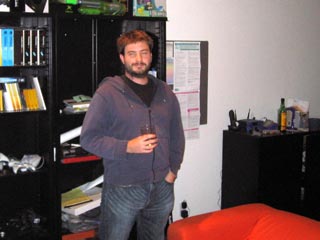 Hanging out at the Gastronaut Studios office. 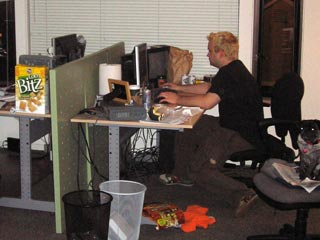 It's a lot like the Behemoth office in San Diego!

Saturday was opening day of the expo hall. It felt like the Penny Arcade guys came to our booth before anything else! They stopped by early to beat the crowds and get their Castle Crashers fix. On an unrelated note, we were next to the Guitar Hero booth. They totally rocked, so I will plug some Guitar Hero movies here on NG: Guitar Zero and Guitar Hero Broke My Knee! 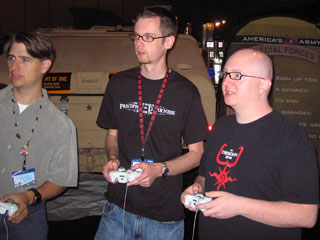 Mike and Jerry from Penny Arcade play some CC. 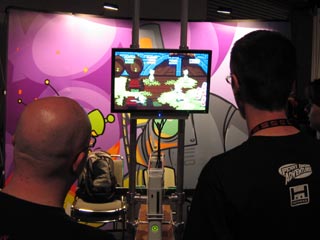 Saturday went great, with tons of gamers coming by our booth to play Castle Crashers and Alien Hominid. While the overall audience isn't as large as Comic-Con, it is such a concentrated group of game fanatics that the resulting energy level is even higher. We almost went through an entire receipt book from sales on Saturday, making PAX very competitive with Comic-Con as the best place to sell our crap. 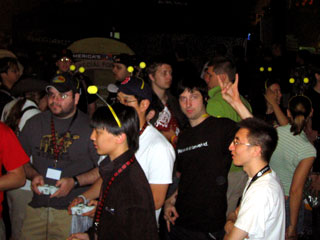 Gamers wore their antennas with pride. 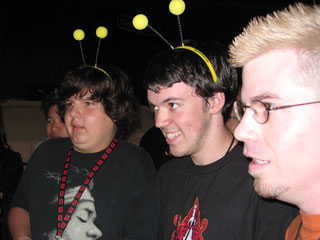 Someone is enjoying the game way too much.

This guy won the "All You Can Eat" competition! 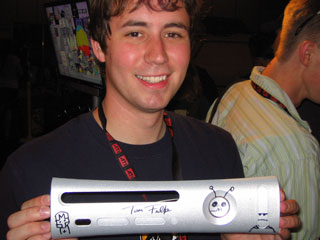 Someone offered the owner $300 for this faceplate. 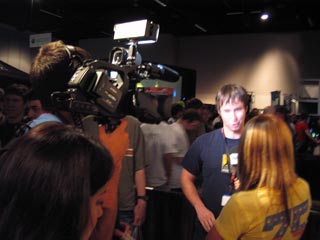 Getting interviewed for GameTrailers.com. 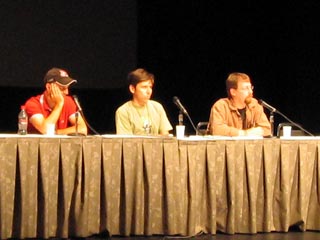 John sat in on a panel discussion.

Saturday night, we drove to downtown Seattle to see the sights. We walked past the original Starbucks (but forgot to take photos) and checked out the famous fish market - that place you sometimes see on TV, where people are tossing fish around. Sadly, it was late and the fish had gone to bed.

I make the best of a bad situation.

The Space Needle stays open late, so we were able to get a great view of Seattle. Guess what? There's a Starbucks at the top of the Space Needle, too! I made sure to pick up a souvenir for April.

PAX continued to rock hard on Sunday. We sold out of most of our t-shirts, and gave away the last of the green Newgrounds shirts (featuring the old tank logo) to a crazed crowd. It felt like for a brief moment, everyone in the expo hall had converged around our booth. Billie had them chanting "Behemoth", "Alien Hominid", "Castle Crashers" and "Newgrounds" the entire time. 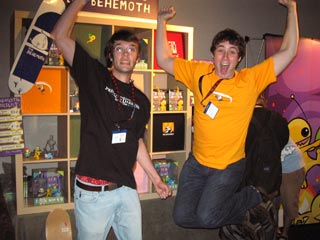 We can barely contain our excitement over PAX! 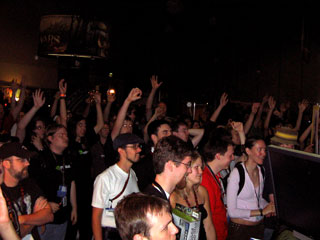 Giving out the last of the old green tank shirts.

Getting interviewed for Electric Playground on G4TV.

Sunday night was the end of PAX and we hustled to take down the booth. We had 50 copies of Alien Hominid, six boxes of AH figurines and three skateboards left, which we donated to Penny Arcade's Child's Play charity.

Packing up the booth. 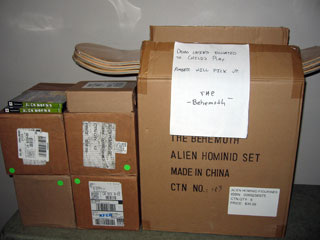 PAX was tons of fun and we definitely plan to attend yearly from now on, making PAX and Comic-Con the two "must-attend" conventions on our calendar. Also note that although Emil doesn't appear in many of these pictures, we couldn't have pulled this off without him. Unfortunately, he was the one taking the pictures most the time. John and Emil do the advanced planning for events like this, I just show up and help carry boxes, then pose for pictures and drink beer.

Special note: I had a wonderful flight home thanks to the import DS and GBA games I bought at Pink Godzilla. Be sure to check out this interview they did with me, where I name the games I bought!

Also, if you like my jump photos, be sure to check out the crazy world of jump photos at the fakefunk jump project!