I prefer sitting on my ass and doing nothing, but this past February/March I took nine days out of my busy schedule to go to London.

The thing I like best about London is the way people "queue". It shows they truly are a more advanced civilization. When people get on an escalator they stand to the right, so people may walk past on the left. I'll be damned if I ever see that kind of mass-courtesy here in America.

As you may know, I live in Philadelphia. This means I use SEPTA for all my public-transportation needs. SEPTA is a rag-tag bunch of misfits governed by a wild-eyed union leader who has turds for brains.

After spending nine days using the London Underground, a fine public transportation system that actually arrives on schedule, my hatred for SEPTA is at an all time high. I can't just blame SEPTA, either. It's the people who use it. The people who urinate on it and even defecate on occasion. I thought this was standard practice until I went to London and found no urine or defecation in site. It boggles the mind!

The citizens of Philadelphia really need to shape up. But back to London...

The exchange rate is insane. Going to the movies will cost the equivalent of $12. Food is just as bad, if not worse. Everything costs at least 60% more than in America. It's a good thing I was only there for nine days. Here are some pictures of me molesting wax people at the wax museum. 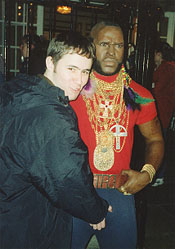 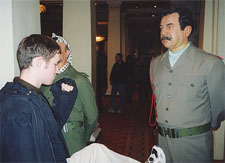 The fries at McDonalds barely had any salt on it, and there is no "supersize". Your meal starts off as "medium", and you have the option to switch to "large". I guess us American's have bigger bladders.

I really like the double-decker bus. It's fun to sit in the top/front and watch people run out of the way. From your perspective, an entire car can be swallowed up underneath the bus. This can be pretty exciting sometimes.

I also saw the musical "Chicago", and the play "Art". Both were good.

Overall, it was a great nine days. London is definitely a nice city, and I wouldn't mind living there. I think I'd miss the defecation, though.